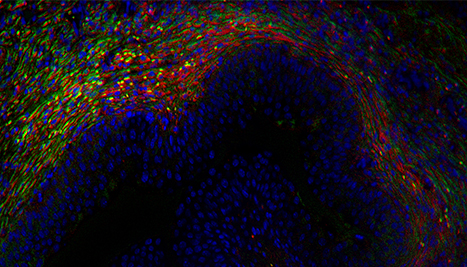 A new phase I clinical trial conducted by researchers at the Center for Cancer Research (CCR) is evaluating the safety and tolerability, or the degree to which any side effects can be tolerated by patients, of a two-drug combination as a potential alternative to bladder removal for bladder cancer patients. The trial targets patients with non-muscle invasive bladder cancer (NMIBC) whose cancers have stopped responding to traditional therapies.

“These are patients who have run out of treatment options for NMIBC and for whom the best standard of care would be bladder removal, but they are not healthy enough to endure surgery or have refused surgery,” says the study’s Principal Investigator Piyush K. Agarwal, M.D., from the Urologic Oncology Branch at CCR. “We’d like to find out how many patients can avoid bladder removal.”

Nearly 80,000 new cases of bladder cancer will be diagnosed this year in the United States, of which approximately 80 percent will occur in men. The vast majority of bladder cancer cases, nearly 70 percent, are first diagnosed as NMIBC. NMIBC is early-stage bladder cancer that has not spread to the muscle tissue surrounding the bladder and therefore is considered non-metastatic.

Early treatment for NMIBC includes surgical tumor removal followed by localized treatment with a vaccine called Bacillus Calmette-Guerin (BCG). This vaccine was originally designed to prevent tuberculosis but was later discovered to reduce the risk of progression and recurrence of bladder cancer in individuals who received the BCG vaccine directly into their bladders. Unfortunately, over a long period of time, BCG and surgery eventually fail to hold back progression of NMIBC in two-thirds of patients, and bladder removal becomes the only option.

Agarwal believes that the best strategy to prevent MIBC is to develop new therapies that would stop NMIBC in its tracks before it has a chance to progress. To this end, he looked at types of treatments that have proven effective against MIBC. Although NMIBC is currently considered a non-metastatic disease, Agarwal says that recent studies have shown that nearly 25 percent of NMIBC patients have cancer cells circulating in the blood stream just as in patients with metastatic MIBC. “So, it’s not unreasonable to think that treatments that target MIBC might also work against NMIBC,” Agarwal says.

Durvalumab is a monoclonal antibody immunotherapy approved by the U.S. Food and Drug Administration for treatment of metastatic urothelial carcinoma, the most common type of metastatic bladder cancer, but the drug has never been tested in patients with non-metastatic NMIBC. Durvalumab operates by inhibiting a protein on the surface of cancer cells that would otherwise reduce the ability of the body’s T cells to kill cancer cells.

Vicinium, a targeted fusion protein, showed promise in a recent phase II clinical trial in which 16 percent of NMIBC patients treated with the drug remained disease free for at least one year. The drug has now advanced to a phase III trial. Vicinium works by binding to a protein that is overexpressed on the surface of urothelial carcinoma cells, an antigen called EpCAM. Binding of the Vicinium protein marks the cancer cells for attack by the body’s natural immune system. But, Agarwal says, “Vicinium used alone has activity, but it’s not impressive as a single agent.”

Finally, in a preclinical study in mice, durvalumab plus a previous version of Vicinium, called Proxinium, acted synergistically, shrinking non-small cell lung cancer (NSCLC) tumors in mice to a far greater degree than either drug given alone.

Based on these studies and trials, durvalumab and Vicinium will be administered in combination in the current phase I trial. Participants will receive doses of Vicinium directly to the bladder where the drug will target urothelial cancer cells. Durvalumab, given intravenously, will then release the brakes on the immune response that Vicinium has triggered. “This would be the first combination of a systemic immunotherapy with a drug given in the bladder at the same time,” says Agarwal.

“The trial is very intensive in that patients receive an intravenous infusion as well as drugs delivered directly to the bladder,” says Agarwal. “But when we did an informal survey of patients, almost everybody said they’d consider an intensive therapy over bladder removal.”

This trial is currently open and recruiting participants.  For those interested in participating, please contact Sonia E Bellfield, R.N., at (240) 760-6118 or sonia.bellfield@nih.gov.