Protein complex could be key to drug responsiveness in lymphoma patients 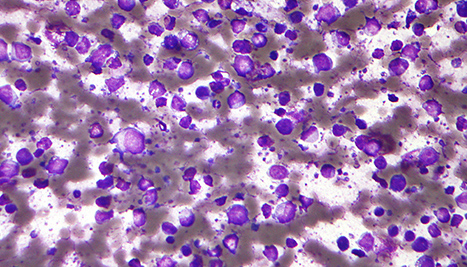 A new research finding offers mechanistic clues for how ibrutinib, first approved by the U.S. FDA in 2013 for use in mantle cell lymphoma, may work in other blood-borne cancers. The finding describes how and why the drug may be most effective in a subset of cancers known as diffuse large B cell lymphomas (DLBCL). It has been generally known that the drug acts by binding to Bruton’s tyrosine kinase (BTK), a protein that plays a key role in cancers that are driven by defects in immune system B cells, but this new finding adds intricate molecular details that may identify which patients are likely to respond to this drug.

A research team led by Louis M. Staudt, M.D., Ph.D., Director of NCI’s Center for Cancer Genomics and Co-Chief of the Lymphoid Malignancies Branch in CCR, has played an important role in determining that signaling by the B cell receptor (BCR) could be an important target to block in treating patients with DLBCL. However, not all lymphoma patients have benefited from the use of ibrutinib to block this signaling. Earlier research by Staudt’s team identified two major subtypes of the disease, germinal center B cell-like (GCB) and activated B cell-like (ABC), and showed that ABC but not GCB tumors responded to ibrutinib in a clinical trial.

In their current research efforts, reported June 20, 2018, in Nature, the investigators focused on the mechanisms that drive the activation of a key protein, NF-kappaB, which promotes the growth and survival of cancerous cells in the ABC form of lymphomas.

Based on CRISPR-based gene activation and proteomic techniques, they found that a ‘super’ complex of the MYD88, TLR9 and BCR proteins, termed My-T-BCR, was an essential factor in the activation process. The researchers also determined that My-T-BCR was located on an intracellular compartment – the lysosome – where it cooperates with the cancer-causing protein mTOR to make NF-kappaB especially active. By this mechanism, lymphoma cells become ‘addicted’ to BCR signaling and are exceptionally sensitive to ibrutinib.

It has been long known that the mTOR protein regulates cell growth and proliferation and is activated by a signaling pathway activated by the enzyme PI3 kinase. Based on the new knowledge that mTOR and My-T-BCR are localized, Staudt and colleagues are now planning a drug trial combining ibrutinib with a PI3 kinase inhibitor in patients with the ABC form of lymphoma. Dr. Staudt emphasizes that combination drug trials need to be based on a clear and deep understanding of why two drugs work well together in order for precision medicine to succeed.

Finally, the investigators developed a precision medicine approach to identifying patients who would most likely benefit from drugs like ibrutinib. They looked at eight biopsy samples from DLBCL patients in a 2012 phase II clinical trial and observed that ibrutinib-responsive tumors had the My-T-BCR supercomplex and ibrutinib-resistant tumors did not. Moreover, Staudt and colleagues had previously shown that ibrutinib is highly active in another ABC-like aggressive lymphoma – primary central nervous system lymphoma – and the present study revealed that the vast majority of those tumors include My-T-BCR. The scientists propose that the My-T-BCR supercomplex could be used as a diagnostic marker to indicate which patients would have the best response to ibrutinib-containing therapeutic regimens.