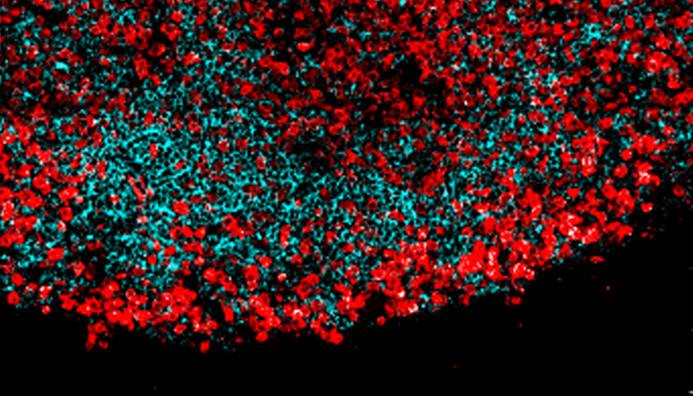 An immunotherapy currently being tested in a clinical trial as a treatment for metastatic cancer has now shown potential in an animal study to reduce recalcitrant pools of SHIV, a laboratory-designed virus used to study human immunodeficiency virus (HIV) infection. The study, published online February 23 in PLoS Pathogens, is the result of a collaborative effort by CCR, the National Institute of Allergy and Infectious Diseases and the Frederick National Laboratory for Cancer Research.

Previous studies demonstrated that an immunotherapy drug, heterodimeric IL-15 (hetIL-15), stimulates the production and activation of white blood cells, boosting their ability to locate and kill cancer cells and cells infected by viruses. The human body naturally produces hetIL-15 but not at levels high enough to win the battle against aggressive cancers or to eliminate reservoirs of HIV in infected individuals.

Our bodies normally fight infection and cancer by producing legions of white blood cells, many of which reside in lymph nodes where they work to eliminate pathogen-infected or abnormal cells. But lymph nodes also provide a well-protected refuge for HIV, the virus that causes acquired immune deficiency syndrome (AIDS). Antiretroviral drugs can keep the virus at bay, but when patients stop taking the drugs, the virus can reemerge from the lymph nodes. This appears to be due, in part, to the difficulty that cytotoxic T cells, a category of white blood cells, have in entering certain parts of the lymph nodes where the virus can hide.

Based on previous evidence that hetIL-15 improves the ability of cytotoxic T cells and natural killer cells to target tumors, the team involved in the new study, led by George N. Pavlakis, M.D., Ph.D., and Barbara K. Felber, Ph.D., both Senior Investigators in the Vaccine Branch, tested whether injections of hetIL-15 might boost the immune system’s ability to locate and attack HIV-infected cells hidden inside lymph nodes.

The scientists found that a two-week regimen of hetIL-15 given to SHIV-infected animals dramatically improved the ability of cytotoxic T cells to penetrate the areas of the lymph nodes that harbor SHIV, called B-cell follicles, and to kill SHIV-infected cells.

The findings suggest that hetIL-15 used in combination with traditional antiretroviral therapies may potentially reduce HIV reservoirs in humans as well. The present study, and a second recent study by Pavlakis and Felber, found that therapeutic doses of hetIL-15 produced few side-effects when given to animals. Clinical trials investigating the long-term effects of hetIL-15 therapy and its efficacy in treating HIV in humans will be the next steps.