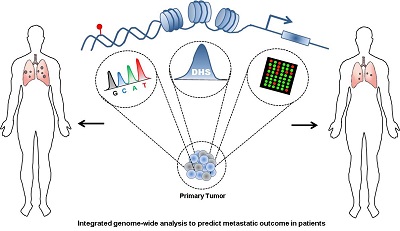 For patients with solid tumors, the primary cause of illness and death is metastasis, a complex process involving multiple steps and cooperation between cancerous and normal cells. Many genes must be involved, but few have been found and characterized. To identify significant numbers of metastasis-associated genes, Kent Hunter, Ph.D., of CCR’s Laboratory of Cancer Biology and Genetics, and his colleagues combined multiple genome-wide analysis methods to study a highly metastatic mouse model, MMTV-PyMT.

Previously, the Hunter lab had bred MMTV-PyMT mice to 27 different strains. They observed reduced metastasis in 12, suggesting that differences in a strain’s genetic background affect the metastatic process. Even related strains had different metastatic capacities, implicating single nucleotide polymorphisms (SNPs) and their related genes as factors associated with metastasis.

The scientists sequenced the genome of the NZB/B1NJ strain, which had reduced metastatic ability compared to MMTV-PyMT. After alignment with a reference genome, the researchers identified about five million SNPs. Since most inherited variation arises from changes in gene expression, they focused on SNPs within DNAse hypersensitivity sites (DHS), reducing the number of potential SNPs to 120,000. Subtracting SNPs shared between the parental strain and NZB/B1NJ brought the total to 54,659. Mapping these SNPs to genes revealed 7,902 associated genes.

The investigators enriched for genes with altered expression by screening the identified genes against two groups of mouse breast tumors generated by crossing MMTV-PyMT and members of the fifth (G5) and seventh (G7) generation of the Diversity Outbred population, which mimics natural expression variation. The researchers collected total RNA from the breast tumors and identified genes with significant expression variation. They subjected these genes to survival or quantitative trait tools, yielding four lists of potential metastasis susceptibility genes. Few genes were common between the distant metastasis-free survival signatures (DMFS) and metastasis-correlated signatures (MCS).

The scientists tested each signature’s ability to predict outcome in human breast cancer. All four were prognostic for estrogen receptor-positive (ER+) but not estrogen receptor-negative (ER-) tumors using the Gene expression-based Outcome for Breast cancer Online (GOBO) tool. Testing the signatures on a second dataset, METABRIC, showed that the MCS were still prognostic for the ER+ subset.

The investigators compared the genes they identified with existing data. Focusing on a metastasis modifier locus on chromosome 9, one gene in the DMFS set, Cadm1, had been identified previously as a metastasis susceptibility gene. Another identified gene within this locus, Pvrl1, was important as well, since its knockdown consistently reduced metastasis in tumor cell lines. They also tested Zbtb16, identified only in the G7 population. Overexpressing the gene in cancer cells had no effect on metastasis, suggesting Zbtb16 may be important in non-tumor cells. In fact, mice lacking one copy of the gene had increased incidence of metastases without any difference in primary tumor weight.

Finally, the researchers used pathway analysis to find those contributing to metastatic disease. The G5 signatures implicated antigen presentation and mitotic pathways. In contrast, the G7 signatures showed interleukin-17 and metabolic and rheumatoid arthritis pathways were associated with metastasis. All four gene sets pointed to tumor growth factor β1 signaling as being upstream as well as ERα and ERβ. Pathway analysis also identified potential targets and drugs for metastatic therapy. Known treatments, such as tamoxifen and synthetic cannabinoids, were highlighted as well as previously unrecognized therapies including 8-bromo-cyclic AMP and the diabetes drug, rosiglitazone, which reduced the number of lung metastases in mice by 25 percent.

Together, these results support the efficacy of this integrated, genome-wide method for identifying metastasis-related genes and suggest the possibility of repurposing existing drugs to prevent or reduce cancer metastasis.