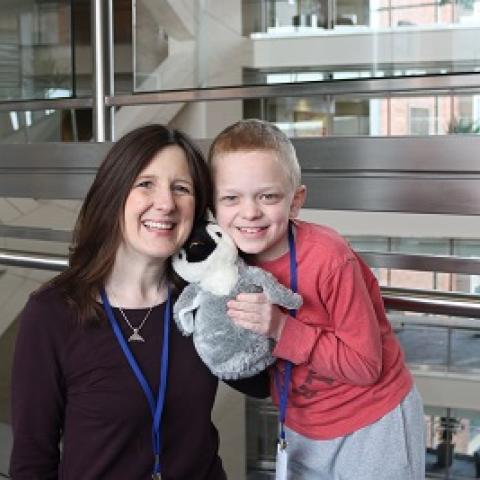 Travis and Kelly Carpenter come to the Clinical Center a few times a year for Travis’ neurofibromatosis treatment. His penguin, Chilly Willy, always comes with them, too. Photo Credit: Abbie Wenthe

Nine and-a-half-year-old Travis Carpenter gets a lot of speeding tickets. (He stresses that “and-a-half” part, too).

These speeding tickets don’t come from a law enforcement officer but Jesse, one of his nurses at the NIH Clinical Center. Travis uses a power chair that he’s adorned with racing stickers, and his speeding tickets come from him zooming down the Clinical Center’s hallways, dodging the steady traffic of doctors, nurses, patients and families. He loves all things racing, NASCAR and pit crews. He wants to be a pit crew chief when he grows up, so he “can boss people around!”

Neurofibromatosis type 1 isn’t slowing him down.

Travis has neurofibromatosis type 1, or NF1, and was diagnosed when he was six months old after his parents, Kelly and Scott, started noticing growth issues and what looked like birth marks on his skin at his 4-month wellness visit. These changes in skin coloring are known as café-au-lait spots and are a characterization of NF1. Travis’ tumor developed on his lower back and left leg by the time he was two-and-a-half.

“It was a scary diagnosis,” Kelly says. “There’s no cure right now.”

The family moved to Salt Lake City, Utah, where Travis could have more access to clinical trials and new research and treatments. He was enrolled on a clinical trial that did not stop his tumor growth or improve his overall health, so his doctors referred him to NIH doctors who were researching NF1.

He started his first CCR clinical trial in 2014 led by CCR Senior Investigator Brigitte Widemann, M.D. that stabilized his tumor. That study ended in February 2015, and he started a new clinical trial with Dr. Widemann in November 2015.

The new trial is a MEK inhibitor trial that requires Travis to take two pills every day. This is the first time throughout his nine years of treatment that his inoperable tumor has stopped growing and actually started shrinking. His latest appointment in February 2017 showed a 31-percent decrease in tumor size since the start of this trial. His leg discrepancy appeared when he was one-and-a-half, and it used to be three inches; now it’s down to one inch. It’s the best response he has ever shown to treatment, and his family has high hopes he will continue to improve.

His only side effect of the trial so far? His hair changing from brown to blonde. Kelly says that if that’s his biggest side effect, they’ll take it. His energy level is increased, and his pain level has decreased.

“We’re seeing the Travis we would see,” she says. “It opened the world for him.”

Travis and Kelly come to the Clinical Center for treatment and tests every few months and stay at the Children’s Inn. Travis loves the playroom, and Kelly loves the close bond with the other families staying at the Inn. Travis loves his care team at the Clinical Center, and one of his favorite things to do is scare Jesse with his penguin, Chilly Willy. They always take a trip to Georgetown Cupcake and try to let Travis be a kid amidst the poking and prodding that comes along with his appointments.

When Kelly isn’t keeping up with Travis’ health care needs or taking her other two sons to hockey practices, she volunteers at the Utah NF Clinic where she talks with families who are just receiving a diagnosis because she’s been on both sides. She likes to tell them, “I’m sorry. I get it. Take it one day at a time. There are people working to find treatments. There are good days and there are bad days.”

Although this clinical trial is not a cure for NF1, it gives the Carpenters encouragement and hope. “I’m glad there are options like this,” Kelly says. “There’s a lot of optimism, and it’s empowering. When there’s not a lot of options, this is the place.”