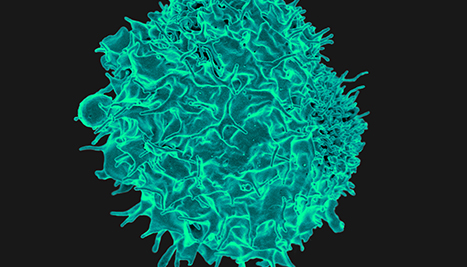 T cells normally fight harmful bacteria and viruses in the body. But a new clinical trial is harnessing them to kill cancer cells.
Credit: NIAID

In recent years, scientists have successfully engineered immune system cells to attack blood cancers, but the approach hasn’t worked as well in solid tumors such as lung or brain cancer. Researchers at the Center for Cancer Research are now investigating whether solid cancers can be eradicated—even after they have spread to other parts of the body—with immunotherapy that is uniquely tailored to each patient. The treatment will target only the genetic mutations specific to that person’s tumor.

“It’s about as personalized as a therapy can get,” says Steven Rosenberg, M.D., Ph.D., Chief of the Surgery Branch in CCR.

Rosenberg’s team will conduct a phase II clinical trial, admitting the first patients within the next one to two months, to test the treatment. The therapy relies on T cells, a type of white blood cell. These immune cells can attack cancer cells if properly primed.

Rosenberg and his colleagues developed a method to identify T cells from a patient’s body that are able to recognize unique mutated protein fragments on the surface of tumor cells. The parts of the T cell that react with those fragments, called receptors, can be isolated in a lab. Then, the researchers add those receptors to other white blood cells, called peripheral blood lymphocytes, that have been collected from the patient. The engineered cells are infused back into the patient so that they can target the cancer cells.

The approach is similar to an existing treatment called CAR T-cell therapy, which Rosenberg’s team pioneered. CAR-T cell therapy involves engineering a patient’s own T cells to attack blood cancer cells, but the treatment targets protein fragments that are common across cancer patients. That approach is less suitable for common solid tumors because they share few mutations. With Rosenberg’s new therapy, the T cells target a different protein fragment in each patient.

Existing treatments for solid cancers rarely cure the disease once it has become metastatic. Common epithelial cancers, which start in cells that form the lining of organs, cause more than 90 percent of cancer deaths per year in the United States. While many therapies can make these tumors shrink, nearly every patient who develops a clinically evident metastatic solid cancer will die from that cancer. “There’s a desperate need for new approaches,” Rosenberg says.

The strategy that Rosenberg’s team is testing showed promise in an earlier trial. His team administered T cells to metastatic melanoma patients. For about one-quarter of patients, the cancer regressed and did not return after six years of follow-up monitoring, suggesting they were likely cured. Further studies suggested that each patient’s T-cell treatment had recognized the cancer’s unique mutated protein fragments.

In a 2014 study, the team tested the approach with a patient whose bile duct cancer had spread to the lung and liver. After administration of T cells that recognized the tumor’s unique mutations, the cancer regressed. The patient is healthy and living normally four years later; more than 90 percent of the cancer has disappeared with only one small lesion remaining in the lung that appears stable. In a forthcoming study, Rosenberg’s team also found that most patients with common epithelial cancers have T cells that can target the mutations specific to that person’s tumor.

There was one problem though. It was difficult to isolate enough of these T cells from a patient. That’s why Rosenberg and his colleagues developed the approach to add the T-cell’s receptors to other white blood cells and grow large numbers of the engineered cells in the lab.

The current trial will include patients with metastatic gastrointestinal, genitourinary, breast, ovarian and lung cancers; glioblastoma patients will also be eligible even if their cancer has not spread. Clinicians will take a tissue sample from each person’s tumor and sequence the genetic material to determine its unique mutations. The patient’s T cells also will be collected and tested to identify the ones that recognize those mutations. Each participant will receive one infusion of cells engineered to carry those T cell’s receptors. “That may be all it takes,” Rosenberg says.

The researchers will evaluate patients to determine if the cancer shrinks or disappears. The team also will monitor whether the engineered cells persist in the body and continue to target the cancer mutations. Once cells are transferred, they can multiply a thousand-fold in a week. “It’s a living treatment,” Rosenberg says.

In the future, his team hopes to improve the therapy by stimulating the cells to proliferate more after infusion. The researchers also are investigating whether new genetic-engineering technology could be used to remove certain genes that suppress white blood cells’ activity from those cells, making them even more effective at killing cancer cells.

If successful, the treatment could offer a way to essentially develop a new drug for each patient. “I see it as a blueprint for the treatment of many common cancers,” Rosenberg says.