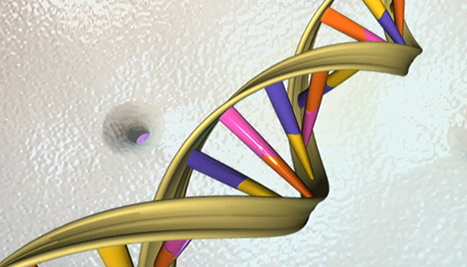 The protein RepID recruits another protein, CRL4, to form a complex with chromatin, the assemblage of proteins and DNA that make up chromosomes, which researchers have now shown plays a key role in regulating DNA replication. The replication process is where DNA makes identical copies of itself before the cell divides. One of the hallmarks of cancer is the loss of control over the DNA replication process, resulting in excess proliferation of cancer cells.  The results of this study by CCR researchers, which appeared July 17, 2018, in Nature Communications, suggest that targeting RepID in cancer cells may help keep DNA replication in check.

Proteins communicate and recruit each other in a series of cascading steps, and this finding links a number of proteins in the chain reaction that RepID initiates. By probing the chromatin in human cancer cells with antibodies, researchers led by Mirit I. Aladjem, Ph.D.,Senior Investigator, Developmental Therapeutics Branch, CCR, and Sang-Min Jang, Ph.D., a postdoctoral researcher in Aladjem’s laboratory, showed that RepID recruits CRL4 to chromatin during the early stages of the cell cycle. CRL4 recruitment occurs before DNA replication, via a set of important proteins. In healthy cells, CRL4 recruitment to chromatin leads to degradation of the CDT1 protein, preventing it from initiating DNA replication more than once each cell cycle. But when CRL4 malfunctions, CDT1 accumulates, which results in unregulated DNA replication.

Another protein complex called SCF also targets CDT1 for degradation, but later in the cell cycle—S-phase—after the cell has already started to replicate its DNA. The researchers showed that since cells that lack RepID are unable to recruit CRL4 to chromatin, they rely on SCF to degrade CDT1 instead. They sorted RepID-containing and RepID-depleted human cancer cells by their stage in the cell cycle and used antibodies to probe for two proteins that make up the SCF complex. Indeed, they saw significantly higher levels of these proteins on chromatin in RepID-depleted cells, especially in S-phase.

The researchers then treated RepID-containing and RepID-depleted human cancer cells with an experimental drug that inhibits SKP2, one of the proteins that makes up the SCF complex. They saw increased levels of uncontrolled DNA replication in RepID-depleted cells, which was associated with higher levels of chromatin-bound CDT1. Treated RepID-depleted cells also caused a higher fraction of cells to undergo programmed cell death or apoptosis. The cause of apoptosis was a buildup of CDT1, which led to uncontrolled DNA replication, leading to DNA damage and death, suggesting RepID expression levels could determine the extent of cancer cells’ sensitivity to SKP2 inhibitors, which are currently under preclinical development.