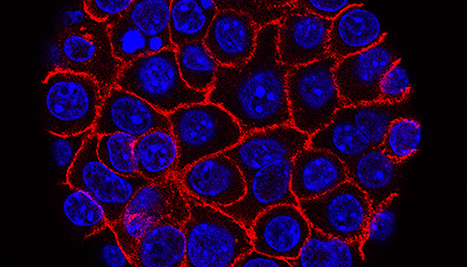 A new phase II clinical trial to assess the safety and efficacy of a drug called selumetinib for treating patients with advanced pancreatic cancer whose tumors harbor a specific genetic marker has opened at the Center for Cancer Research and is currently recruiting participants. Advanced pancreatic cancer includes stage III, in which the tumor has spread to tissues surrounding the pancreas, and stage IV, in which cancerous cells have entered the blood stream and spread to the lymph nodes and other distant tissues and organs.

“None of the approved chemotherapy efforts to treat pancreatic cancer have been working,” says Udo Rudloff, M.D., Ph.D., an Investigator in the Pediatric Oncology Branch, who is leading the study.

Patients with pancreatic cancer face a grave prognosis, with less than 10 percent of people surviving longer than five years after diagnosis. Survival rates for the disease have not changed substantially in more than three decades, and by 2030, researchers predict that pancreatic cancer deaths may outpace both colon and breast cancer deaths.

The genetic marker targeted in this new trial, called KRAS G12R, is a mutation in the KRAS gene that awakens an enzymatic pathway that causes cancer cells to proliferate. Selumetinib acts by inhibiting a particular enzyme in this pathway called MEK.

“KRAS G12R mutations within pancreatic cells require the MEK enzyme and can’t switch to another pathway,” says Rudloff. “We want to see if selumetinib can target this pathway and inhibit the formation of new pancreatic cancer cells.”

Although nearly all pancreatic cancer tumors carry a mutation in the KRAS gene, KRAS G12R is the third most common KRAS mutation and is thought to be a driving force behind 15 to 18 percent of all pancreatic tumors.

MEK inhibitors like selumetinib have previously shown efficacy in shrinking tumors in malignant melanoma, eye and soft tissue tumors in children and in shrinking human pancreatic cancer tumors with the KRAS G12R mutation that were transplanted into mice. If the drug proves effective in clinical trials for pancreatic cancer, researchers may also expand to testing its effectiveness in other cancers that carry the KRAS G12R mutation, including non-small cell lung cancer and colorectal cancer.

Rudloff and his team hope to enroll at least 180 patients with advanced pancreatic cancer to the trial and screen them for the KRAS G12R mutation. Those patients whose cancers harbor the mutation will then receive daily oral doses of selumetinib on an outpatient basis. If at least one-third of trial patients experience at least a 30 percent tumor shrinkage over two years with minimal side effects, the drug could advance into larger clinical trials.

This new clinical trial is a multi-institutional effort with at least 11 cancer centers in North America currently working with NCI’s Cancer Therapy Evaluation Program (CTEP) to recruit and treat patients. In the coming months, Rudloff’s team also hopes to encourage additional cancer centers to join the NCI Experimental Therapeutics Clinical Trials Network so that clinicians can access a larger patient pool and have the opportunity to conduct trials jointly with other institutions.

In addition to receiving the experimental therapy, clinicians will screen trial participants for the presence of more than 50 other cancer-associated genes to help identify pancreatic cancer biomarkers as well as find potential drug targets that could help focus a patient’s treatment options.

“For a subgroup of pancreatic cancer patients, it’s a potentially promising personalized effort with a drug that doesn’t have the toxicities of some of the standard chemotherapies,” says Rudloff.

The Center for Cancer Research is NCI’s internal cancer center, a publicly funded organization working to improve the lives of cancer patients by solving important, challenging and neglected problems in cancer research and patient care.  Highly trained physician-scientists develop and carry out clinical trials to create the medicines of tomorrow by treating patients at the world’s largest dedicated research hospital on the campus of the National Institutes of Health in Bethesda, Maryland. Search all CCR clinical trials, and subscribe to have the latest CCR clinical trials sent to your inbox.