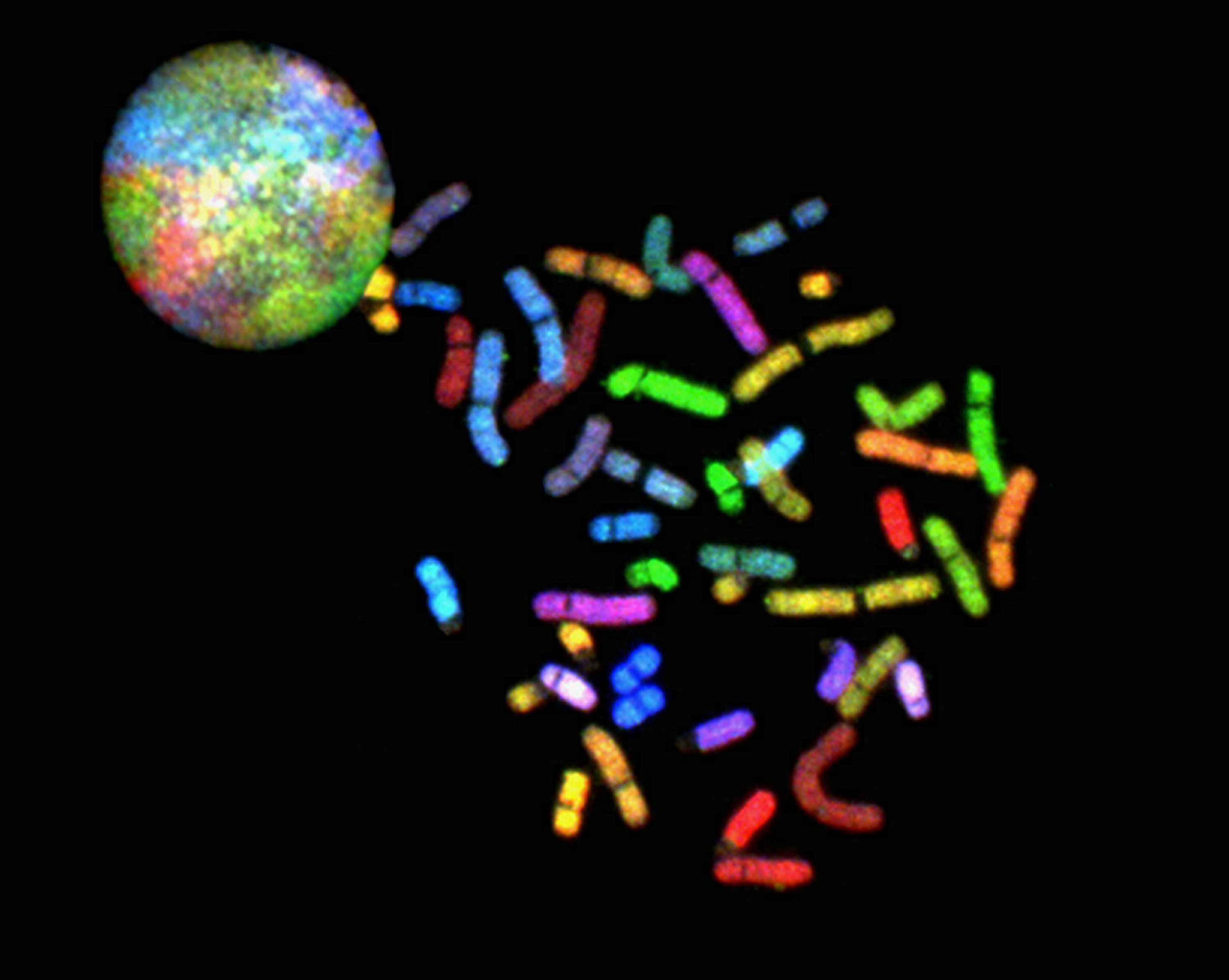 This photo shows normal human chromosomes visualized by spectral karyotyping (SKY). New research from André Nussenzweig, Ph.D., shows that packing an entire genome inside the cramped quarters of a cell nucleus can put chromosomes at risk for damage.
Photo by Thomas Ried

Packing an entire genome inside the cramped quarters of a cell nucleus can put chromosomes at risk for damage, according to new research led by André Nussenzweig, Ph.D., Chief of CCR’s Laboratory of Genomic Integrity. The findings, reported July 20, 2017, in Cell, suggest that DNA breaks are routinely introduced and then repaired as a cell folds and organizes its genome, and that when repair processes fail, these breaks can give rise to chromosomal abnormalities characteristic of cancer cells.

One of the most essential activities in a cell is the ability to cut DNA. A quick snip can relieve stress on a tightly coiled molecule or free a tangled strand, and afterward, the break is usually swiftly repaired. Even temporary breaks create opportunities for lasting damage, however. When a DNA strand is broken it can sometimes be reconnected inappropriately, fusing together bits of different chromosomes in an event known as a translocation. This can lead to the imbalanced regulation of genes, a precursor to cancer formation.

By mapping the sites where double-strand breaks of DNA commonly occur, Nussenzweig’s team discovered that chromosomes have an inherent vulnerability to translocations that arises from the way their DNA is folded inside cells.

Nussenzweig and his team undertook the study because they wanted to understand why certain chromosome translocations tend to show up in cancer cells again and again. Some of these genetic rearrangements are known to spur growth and potently support cancer cells’ survival. But it is possible that certain rearrangements occur more frequently because they arise from fragile sites where DNA breaks are common, Nussenzweig says.

To explore that possibility, the team took advantage of a method they developed last year to map DNA breaks in the genome. They focused on DNA breaks created by an enzyme called topoisomerase 2 (TOP2), a biological scissor that helps keep long strands of DNA orderly within a cell’s compact nucleus. Normally, the enzyme snips DNA just long enough to free an entangled strand, then reseals the break. For their experiments, Nussenzweig and his colleagues interrupted this process by treating lab-grown cells with a drug that allows TOP2 to create breaks, but not to close them.

Analyzing the DNA after TOP2 created its breaks, the researchers found a clear pattern. “We found that the initial breakage actually correlates very nicely with where the translocation eventually occurs,” Nussenzweig says. “It was surprising that so many fusion genes associated with cancer seem to be direct targets of topoisomerase 2.”

In further experiments, the researchers established that TOP2 cuts DNA near loop anchors—tethered sites along a DNA molecule where protein complexes encircle the DNA and guide it into a loop, bringing distant parts of the chromosome together to facilitate chromosome organization and interactions. Since pulling segments of DNA into these loops can entangle other parts of the chromosome, the researchers propose that TOP2 maintains order by cutting and resealing DNA to eliminate knots. The breaks likely help vast lengths of DNA remain functional and organized within a cell’s nucleus, but they also appear to put the genome at risk of translocations, the scientists say.

Notably, Nussenzweig says, they found that DNA breaks affected even genes that were not in active use by cells. “Prior to this finding translocations have been linked to either transcription or replication problems,” he says. “We were very surprised that the damage that we saw was independent of both of those, but rather, related to problems during chromosome folding.”

In this video abstract, Nussenzweig and his colleagues explain how the intricate architecture in the cell nucleus makes specific DNA sites more susceptible to breaks that, if not properly fixed, can lead to cancer.