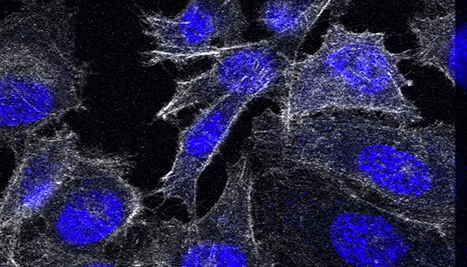 Center for Cancer Research investigators and colleagues have found that a sophisticated imaging technique could predict whether prostate tumors will respond to drugs that inhibit their metabolism. Researchers have begun exploring the possibility of disrupting tumor metabolism as an alternative to androgen deprivation therapy, a common treatment for prostate cancer that reduces levels of male sex hormones or blocks them from fueling prostate cancer cells. Although it can be effective for several years, most patients eventually develop resistance to a hormone blockade.

In a study led by Deborah Citrin, M.D., Senior Investigator in the Radiation Oncology Branch, an imaging technique called hyperpolarized carbon-13 pyruvate magnetic resonance spectroscopic imaging (MRSI) identified prostate tumors in mice based on the rate at which they converted the molecule pyruvate to lactate. Indeed, hyperpolarized carbon-13 pyruvate MRSI predicted tumor response to a drug that blocks this step. The findings appeared online in Clinical Cancer Research on March 29.

Most imaging techniques that assess metabolism measure the levels of molecules involved in metabolic reactions at a single point in time, or steady-state levels. It’s unclear whether, for instance, high-steady-state levels of lactate are the result of glycolysis converting lots of pyruvate into lactate or lactate not getting shuttled out of the cell. Hyperpolarized carbon-13 pyruvate MRSI, however, allows researchers to specifically image and measure the rate of pyruvate-to-lactate conversion in real time.

Citrin and her team implanted two human prostate cancer cell lines, DU145 and PC3, in mice and compared the resulting tumors. They hypothesized that the cell line with the faster rate of pyruvate-to-lactate conversion, as measured by hyperpolarized carbon-13 pyruvate MRSI, would show a stronger response to FX-11, a drug that blocks the enzyme that converts pyruvate to lactate. When they injected the mice with pyruvate that had been polarized with an extremely strong magnet, rendering it visible by MRSI, DU145 tumors converted the pyruvate to lactate more efficiently than PC3 tumors. Steady-state levels of lactate and pyruvate didn’t differ significantly between DU145 and PC3, but PC3 tumors had a slightly higher ratio of lactate to pyruvate.

This technique could open the door to more personalized prostate cancer treatments if the mouse studies can be replicated in humans. “This is a minimally invasive imaging test that may allow us to predict whether a tumor is going to respond to a drug or even to potentially test the patients shortly after they start a drug and confirm it’s working,” Citrin says.