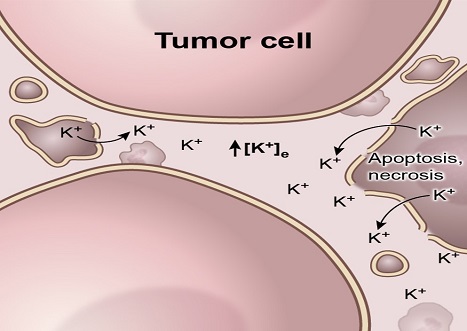 Scientists at the National Cancer Institute’s Center for Cancer Research have discovered that an abundance of potassium inside tumors dampens immune responses, helping the tumors evade the body’s defenses. In animal experiments, genetically equipping immune cells rid themselves of potassium made them more effective at fighting cancer. The finding, published September 14, 2016, in the journal Nature, suggests a tactic for improving the effectiveness of cancer immunotherapies.

Researchers are working to develop therapies that can selectively target and destroy tumors anywhere in the body. A leading approach involves removing cancer-fighting T cells from a patient, genetically modifying them in the laboratory to enhance their anti-tumor activity, and then returning them to the patient. In clinical trials, some patients have experienced complete regression of their tumors with this treatment, called adoptive cell transfer. “It works, but in many cancers it needs to work better,” says Nicholas P. Restifo, M.D., a senior investigator in CCR’s Surgery Branch, who led the new study.

In search of clues to help researchers improve cancer immunotherapies, Restifo and his colleagues have been analyzing the most elemental aspects of tumors and their microenvironments. In their recent study, they wanted to determine how the dead cells that are often prevalent within tumors impact nearby immune cells.

In experiments with both mouse and human tumors, Restifo’s team, including NCI surgical oncology research fellow Robert Eil (now at Oregon Health and Sciences University), found the fluid that fills the space between tumor cells can contain high levels of potassium, an ion that is usually concentrated inside cells. The researchers found that extracellular potassium was highest in tumors with a lot of cell death, or necrosis, suggesting the ions came from cells that had released their contents into the local environment when they died.

Restifo and his colleagues tested the impact of these unusually high potassium levels on anti-tumor T cells, and found that the ions shut those cells off. “Our studies show that the release of potassium really is immunosuppressive,” Restifo says. That can be advantageous in some situations—preventing an overactive response when injury causes a lot of necrosis, for example. But when it comes to controlling cancer, potassium’s effect on the immune system is a hindrance.

Encouragingly, Restifo and his colleagues found a way to overcome potassium-induced immune suppression. They genetically manipulated tumor-specific T cells to introduce a potassium ion channel, Kv1.3. The channel lets cells release potassium ions that stymie the immune cells. In mice, these modified T cells significantly enhanced the immune system’s ability to clear tumors. “The theory is that when they go into the tumor microenvironment they’re able to deal with this enhanced extracellular potassium,” Restifo explains.

Restifo says it should be possible to reprogram patients’ anti-tumor T cells to give them the same capability—potentially complementing therapies that target other mechanisms of immunosuppression. “Our future steps are toward developing clinical trials based on these exciting new findings,” he says.