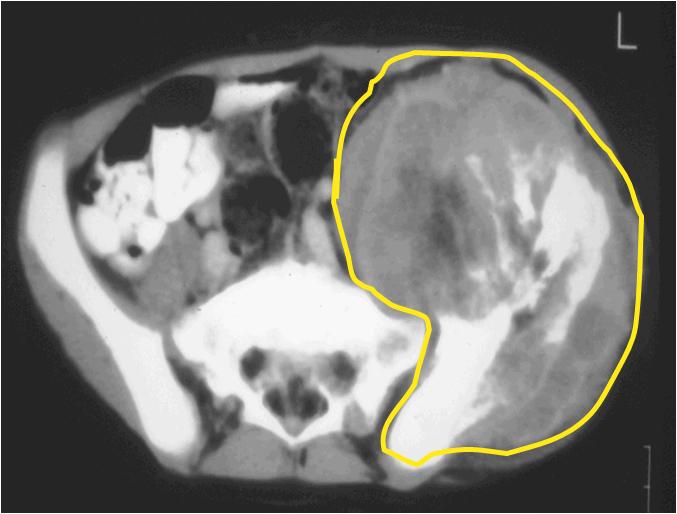 A tumor (circled in yellow) grows from the ilium bone in the pelvis of a Ewing sarcoma patient at NIH.

The largest and most comprehensive genomic analysis of individuals with Ewing sarcoma performed to date reveals that some patients are genetically predisposed to developing the cancer. The study, published January 26, 2017, in Genetics in Medicine, was led by Javed Khan, M.D., Deputy Chief of CCR’s Genetics Branch, and included researchers from the H. Lee Moffitt Cancer Center in Tampa, Florida, and the Walter Reed National Military Medical Center in Bethesda, Maryland.

Ewing sarcoma is a highly malignant cancer that arises in bone or soft tissue and occurs more frequently in teenagers and young adults. Previous studies have indicated that although the cancer most commonly arises by random chance, in some cases mutations in the patient’s own DNA predispose them to developing it.

The current study, which analyzed sequencing data from the genomes of 175 Ewing patients, found that approximately 13 percent of Ewing patients indeed carry mutations in DNA repair and other genes already known to be associated with a predisposition for a variety of cancers. Based on the new evidence, the investigators recommend more frequent cancer screenings for individuals with a family history of Ewing or who have undergone genome sequencing and found that they carry suspect mutations.

To identify additional potentially cancer-causing mutations, Khan and his team at CCR are now launching a large-scale protocol, called ClinOmics, for children and adults enrolled in CCR clinical trials to sequence their DNA and that of their tumors. Identifying mutations that underlie cancer development can aid the development of genome-guided precision cancer therapies. Learn more about clinical trials at CCR here.