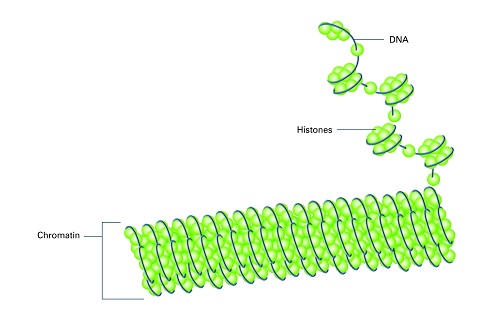 DNA contains the instructions a cell uses to build proteins essential to life. The complete supply of DNA is packaged inside the cell as macromolecules called chromosomes; the complete set of chromosomes is called a genome. Each chromosome houses many working units called genes, and each gene sits within tightly coiled DNA strands that are wrapped around histones proteins in a package called a nucleosome. Chromatin is the full collection of these nucleosomes. The genome is stored in the cell nucleus.

In the September 30, 2016, issue of the journal Science, scientists led by former CCR postdoctoral fellow Paola Scaffidi, who is now a group leader at the Francis Crick Institute in London, report that an essential DNA-packing protein called linker histone H1.0 is present in varying levels in the cells of tumors, and plays an important role in determining which cells have the capacity to sustain the tumor’s growth.

Histone H1.0 has long been known to help package DNA inside of cells. The protein is most abundant in specialized cells with little ability to divide. Dr. Scaffidi and her colleagues, including CCR Director Tom Misteli and former NCI postdoctoral fellow Eran Meshorer, now a professor at the Hebrew University of Jerusalem, have determined that tumor cells that have stopped producing H1.0 histones reactivate growth-promoting genes and regain the ability to self‐renew and thus drive tumor growth.

In work that began at NCI, Scaffidi analyzed clinical samples representing six different types of cancer and found variable levels of H1.0 within each tumor. Analysis of glioblastoma and breast cancer samples revealed that more aggressive, high-grade tumors had a greater proportion of cells with low levels of H1.0 than tumors of lower grades. She also observed that H1.0 levels were consistently low in cancer stem cells, which have an unlimited potential to divide. By restoring production of H1.0 in animal tumors and in lab-grown cancer stem cells, the team was able to drive tumor cells to differentiate and lose their proliferative potential. The findings show that it is the subpopulation of cells with low H1.0 levels that drive the growth of the tumor mass. These results suggest potential new therapeutic strategies for restricting tumor growth by interfering with the epigenetic landscape of select cells in a tumor.