Gene Positioning as a Diagnostic Marker in Prostate Cancer 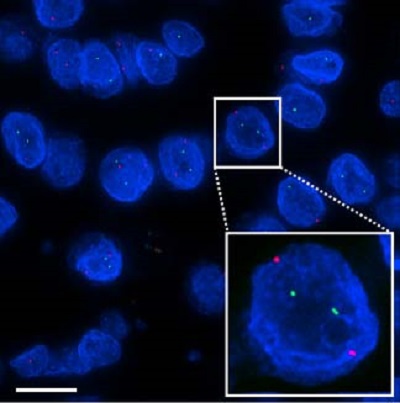 Prostate cancer is the most commonly diagnosed cancer in American males. Current diagnostic tests of prostate cancer are subjective and cannot determine aggressive cancer from indolent cancer. To better serve the approximately 220,000 U.S. men diagnosed with prostate cancer each year alternative diagnostic and prognostic strategies are required. Current research suggests that not only the activity but also the location of some genes are altered in cancer, including thyroid cancer and breast cancer. Work recently published by Tom Misteli, Ph.D., and Karen Meaburn, Ph.D., of CCR’s Laboratory of Receptor Biology and Gene Expression, and their colleagues examined the spatial organization of genes in prostate cancer and have identified three genes with disease-specific repositioning, making them potential cancer biomarkers.

The NCI investigators screened the nuclear position of 40 genes, using fluorescence in situ hybridization (FISH) and quantitative imaging. To cast a wide net, the genes positioned included a random selection of genes not previously associated with prostate cancer in addition to genes commonly misregulated in prostate cancer. Images were acquired from sectioned human tissue and the radial position of a gene, i.e., the distance between the center and edge of the nucleus, was analyzed in 100-200 cells per gene. Initially, the investigators determined the position of each gene in several normal prostate tissues to establish variability of gene location between individuals. While the majority of the genes showed a consistent nuclear position, six genes showed a high-degree of variability in position eliminating them as useful diagnostic markers.

The investigators next compared the position of genes between normal prostate tissue and prostate carcinomas. Of the genes examined, 28 showed no, or limited, variability of position between normal and cancerous tissue. The researchers identified three genes which occupy statistically different positions in 56-93 percent of the prostate cancers analyzed, compared to normal tissue, whilst being positioned similarly amongst the normal tissues. These genes were the transcription factor FLI1 and the matrix metalloproteinases MMP9 and MMP2. Reassuringly, while genomic instability is a common feature of cancer, the investigators found the repositioning events to be independent to changes in copy number of these genes.

The researchers then examined the repositioning of these candidate genes in benign hyperplastic tissue to determine if the repositioning is specific to cancer or if it is a more general response to disease. Neither FLI1 nor MMP9 repositioned in hyperplastic prostate tissue, but MMP2 repositioned in both hyperplastic and cancerous tissues. The rates of false-positives and false-negatives was low for these genes, especially when using in combination in a multiplexed format. These data point to the use of the nuclear position of the genes FLI1 and MMP9 as potential diagnostic markers for prostate cancer.

This work suggests the potential use of gene positioning as a diagnostic marker for prostate cancer and as a method for differentiating cancer and benign hyperplastic tissue. Future work will determine whether any of these markers can be linked to aggressiveness of the disease and, particularly, whether they can be used to distinguish indolent from aggressive early tumors.