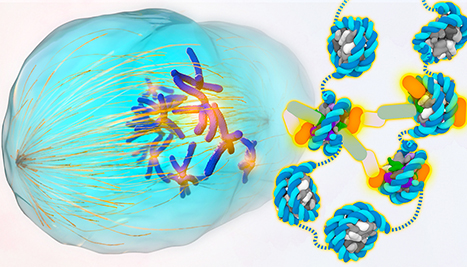 Schematic illustration of segregation of chromosomes (shown in dark blue) during cell division, highlighting a small region on the chromosome called the centromere (shaded orange) in the expanded view at right. This finding illustrates principles underlying the interaction between the CENP-A nucleosome (double rings at right) with the kinetochore protein CENP-N (in orange) and its broader significance for chromosome organization.
Photo credit: Veronica Falconieri, Sriram Subramaniam Laboratory, CCR/NCI/NIH.

“This study represents a key missing step in the ongoing investigation into kinetochore structure,” said Bai.

The kinetochore is a complex and dynamic molecular machine and is challenging to visualize at the molecular level. A critical component of this machine is the interaction between the centromeric protein A (CENP-A) and kinetochore protein CENP-N, which is the complex that   the researchers visualized using cryo-EM and further investigated in the test tube and in living cells. Their findings provide a glimpse into the “code” used by CENP-N to recognize CENP-A as well as new insights into how this mode of recognition appears to be conserved across the evolutionary spectrum.

“Evolutionary pressures cause significant variation in centromeres, so kinetochore proteins like CENP-N must ‘keep up with the times’ to ensure error-free cell divisions,” explained Kelly.

“The use of cryo-EM was essential to examine key interactions in the kinetochore in molecular detail,” said Subramaniam. “Our findings lay the foundation for unraveling further details of kinetochore architecture and steps in its assembly, with the eventual goal of being able to understand the process well enough to develop new approaches to treat aneuploidy and related cancers.”