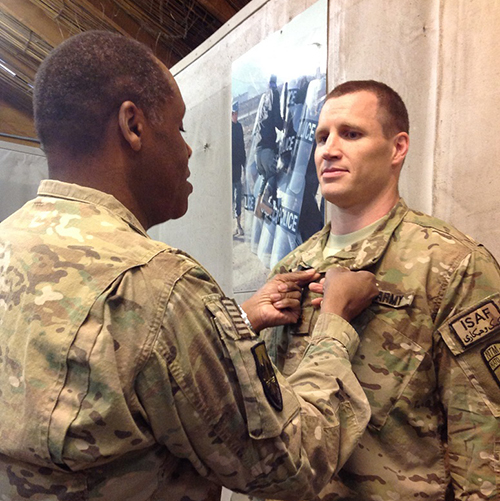 This photo is of Mai in Afghanistan receiving the Bronze Star from Lieutenant General Michael Williamson (this was from December, 2013, just a couple of months before he was diagnosed with Lymphoma)
Photo courtesy of Michael Mai

Michael Mai grew up a simple farm kid in Iowa who became interested in the military at a young age. After graduating from West Point in 2000, he was given the opportunity to train in the hammer throw for the Olympics as part of the Army’s World Class Athlete program. Despite having the second furthest throw in the U.S. in 2008 and finishing fifth in the Olympic Team Trials, he never made it to the Olympics. He did, however, win the silver medal in the 2011 PanAm games, the Olympic Games of the Western Hemisphere. After ending his athletic career in 2012, Mai, then a Major, volunteered for a one-year deployment in Afghanistan.

In August of 2013, eight months into his deployment, he noticed a small lump between his neck and shoulder. At first, he thought nothing of it and brushed it off as a lipoma, a slow-growing fatty lump, since he already had one in his arm. However, during the next four months of his deployment, Mai began to feel more tired and had severe stomachaches after meals. A couple of weeks after his return to the United States, he noticed that the small lump had started to grow and immediately went to the emergency room at Fort Belvoir to get it checked out. The following events occurred over the course of three days.

A CT scan revealed large lymph nodes in his upper body, leading to a biopsy that ultimately diagnosed diffuse large B-cell lymphoma (DLBCL), activated B-cell subtype. Doctors informed Mai that this type of lymphoma was particularly difficult to treat and referred him to the National Institutes of Health (NIH) where Mark Roschewski, M.D., Clinical Director of the Lymphoid Malignancies Branch and a leading expert on the management of B-cell lymphomas, could offer innovative treatment.

Mai says that receiving the news hit him like a bullet. His wife, who was seven months pregnant at the time, and then 13-month-old daughter were in the room with him, and his wife instantly broke down in tears. The thought crossed his mind that he just wanted to live to see his baby born. The news was not a complete shock, however, as three of his father’s seven siblings and two of his cousins had all had some form of lymphoma.

He was set to begin treatment four days later due to a large, cantaloupe-sized lymph node in his abdomen that was growing at three times the normal rate of DLBCL and could cause liver failure. To make matters worse, a blizzard was anticipated to hit on the day he was supposed to begin treatment. Mai and his wife went ahead and booked a room at the nearest hotel in order to make sure they were able to get to the NIH Clinical Center in Bethesda, Maryland.

Dr. Roschewski provided some insight into the difficulties surrounding Mai’s case. “One of the main challenges for a clinician is personalizing a treatment plan for an individual patient. Of course, some decisions are clear-cut but many in oncology are not. The main problem that we faced in his situation is that we were not confident that standard therapy for his DLBCL would be effective enough. He had many high-risk features of his disease, including how big the tumor was, how fast it was growing and its mutations.

“We knew that standard therapy could cure him of his disease, but we set the probabilities at around 50 percent. We had just completed a phase II study of an agent for his type of lymphoma and predicted that the agent had around a 40-percent chance of adding additional benefit to standard therapy. We also knew that the agent could be safely added to anthracycline-based chemotherapy based on a phase 1 study published right about that time.  What we didn’t know – and still don’t know – is whether the agent added to his regimen, in this case, the DA-EPOCH-R anthracycline-based regimen, would offer a greater benefit of cure to him.  The stakes were very high, and after much discussion, we elected to add it.”

Mai says, “Every cycle [of treatment] I had was a little different, but [the NIH staff] were always there to help me out. They went above and beyond for me.” If he ever experienced strong side effects, the NIH staff would work closely with him to adjust where necessary and ensure that everything was working properly. While he was receiving treatment, he worked 50 percent of the time and came to the NIH for treatment daily and then returned to the Pentagon where he was stationed.

Mai has been cancer free for four years now. Unbeknownst to him at the time, the survival rate for his subtype of DLBCL was only 20 percent. Dr. Roschewski added “In [Mai’s] case, we cleared him of his disease, and he remains in remission. We will never know whether or not the agent made a difference, and that is the focus of future studies we have here.”

Of Mai and his treatment, Dr. Roschewski says “We all prefer to think of the decisions we make in oncology as science-driven, but many of our decisions fit into the category of the “art of medicine.” Michael Mai’s case is a good example of this. For me, personally, many things about his case were memorable. His age and active-duty status were things that hit very close to home for me as a military physician. The fact that his wife was pregnant at the time of diagnosis was a good example of a situation that highlights the importance of our decisions. Michael is an exemplary patient as a person who was brave enough to participate in clinical research and wise enough to know that he did so with significant unknowns. Oncology will not make progress without people like Michael willing to participate in clinical trials.”

Mai continues to serve his country and currently works as a comptroller for the 1st Theater Sustainment Command at Fort Knox, Kentucky, where he manages the logistics funds in the Central Command area of operations for Afghanistan, Iraq and Kuwait. He credits the military for supporting him in seeking the best care possible so he could “be there for [his] family and continue to serve and do everything [he wanted] to do.”