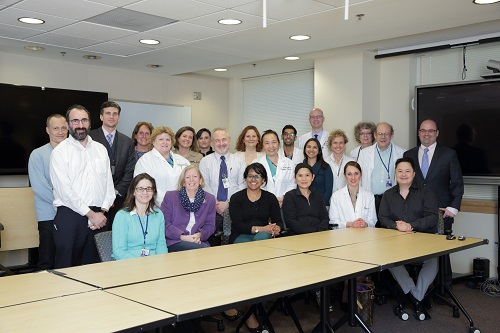 The new NIH Foregut Team includes experts from a wide range of disciplines. The team hopes to give patients the best possible outcome by working together and sharing their expertise.

Cancers of the foregut don’t get much attention. These tumors occur in a section of the gastrointestinal tract that includes the esophagus, stomach, pancreas, liver, bile ducts and part of the small intestine. Altogether, about 140,000 people per year are diagnosed with these cancers in the United States. By comparison, lung cancer alone strikes more than 220,000 Americans per year.

Although foregut cancers are not the most common types of tumors, “they are quite deadly,” said Jeremy Davis, M.D., Staff Clinician in CCR’s Thoracic and Gastrointestinal Oncology Branch. For instance, about 90 percent of breast cancer patients will survive five years after diagnosis. In comparison, only 30 percent of people with stomach cancer, 18 percent with esophageal cancer and 8 percent with pancreatic cancer will live that long.

Survival rates are poor for several reasons. First, doctors lack effective screening tools for cancers of the foregut, so the tumors often are not caught until they are advanced. Because patients are diagnosed late, the cancer may already have spread too far to be removed by surgery. At that stage, chemotherapy is the main treatment option, but it doesn’t tend to work as well in foregut cancers as in other cancers.

Drugs that specifically target these tumors aren’t very effective. Treatments for foregut cancers haven’t progressed as much as those for more common cancers in the last 20 to 30 years, Davis said.

To address this problem, Davis and about 30 colleagues have formed the NIH Foregut Team. The group includes researchers and clinicians from a wide range of fields, including surgical oncology, radiation oncology, nuclear medicine, nutrition, pain and palliative care, gastroenterology, critical care and nursing. By bringing these experts together, the team hopes to support stronger and more collaborative research on foregut cancers and provide better care to patients.

“The treatment of these cancers is not always straightforward,” Davis said. “It requires a truly multidisciplinary approach.”

For instance, patients with esophageal cancer can develop blockages that prevent them from swallowing. In these cases, a surgeon may need to perform a palliative procedure with the involvement of a gastroenterologist. Interventional radiologists often address complications that arise from operations. A patient with stomach cancer may need to have his or her stomach removed, a procedure in which the esophagus is then attached to the intestine.

“That’s a life-altering event,” Davis said. A registered dietitian helps change the patient’s eating habits, and a clinical pharmacist monitors the person’s medication levels because drugs may be absorbed differently.

In addition to offering treatment, the team is recruiting patients for clinical trials to advance research on foregut cancers. One trial focuses on hereditary gastric cancer syndromes, disorders in which patients inherit a genetic mutation that greatly increases their chances of developing gastric cancer. One common mutation is in a gene called CDH1, but scientists don’t understand why this genetic error leads to stomach cancer. Many patients have mutations in genes that haven’t yet been identified. By sequencing patients’ genes and tumors, the researchers hope to find out which mutations are involved in these cancers and why some people develop tumors much earlier than others.

In another trial, the team will study sporadic gastric cancer, a type of stomach cancer that is not due to an inherited genetic mutation. This month, the researchers started recruiting patients whose tumors have spread into the abdominal cavity. They plan to investigate whether chemotherapy delivered to that area is an effective way to increase survival rates and the molecular processes that drive cancer cells to spread beyond the stomach. Other ongoing and upcoming trials include studies on pancreatic cancer, esophageal cancer and liver disease.

Although the NIH Foregut Team members have already worked together for years, they believe that a more formal structure will improve treatment for patients. The researchers and clinicians plan to set up a foregut clinic—regular meetings where members can assess patients together—to streamline the process.

“We view ourselves as one integrated team,” Davis said. “It’s not just having the expertise but the ability to work seamlessly together that will give patients the best possible outcomes.”