Focusing on function to mine cancer genome data 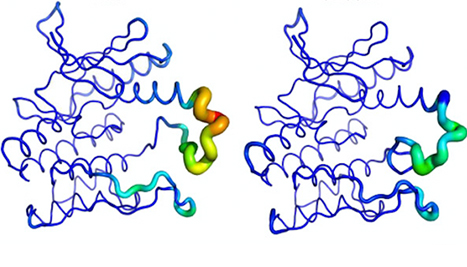 Modeling shows how certain mutations change the level of movement within the activation loop of MAP2K4, indicated by the width and color of the ribbon.
Photo courtesy of John Brognard, Ph.D.

CCR scientists have devised a strategy to sift through the tens of thousands of mutations in cancer genome data to find mutations that actually drive the disease. They have used the method to discover that the JNK signaling pathway, which in different contexts can either spur cancerous growth or rein it in, acts as a tumor suppressor in gastric cancers.

The discovery, reported April 17, 2018, in Science Signaling, was a result of a targeted search across more than 10,000 samples for mutations that impair the function of a class of enzymes called kinases. The study also identified other kinases with potential tumor suppressive roles.

“I think it provides some exciting leads to understand genes and proteins that have never been studied and figure out their role in cancer,” says John Brognard, Ph.D., Investigator in CCR’s Laboratory of Cell and Developmental Signaling, who led the research.

Cancer researchers now have access to troves of genetic data from patient tumors, but finding meaningful information in that data remains difficult, Brognard says. Genetic havoc is a defining feature of cancer cells, and it is not uncommon for tumors to carry as many as 1,000 different mutations. “Trying to define which one of those mutations is causal and really playing a role in promoting tumorigenesis and driving proliferation and metastasis is a real challenge,” Brognard says.

Many known cancer-driving mutations affect kinases, and the enzymes are considered good targets for drug development. So Brognard and Andrew Hudson, M.D., Ph.D., a former clinical fellow in his lab, decided to search for additional relevant mutations among this large family of proteins.

Their team searched for mutations within more than 400 kinase genes in genome sequences from The Cancer Genome Atlas and the Cancer Cell Line Encyclopedia. Dozens of types of cancer were represented in the search, and more than 11,000 patient tumors and 1,000 cancer cell lines were included.

Because they were seeking mutations that impact enzyme function, they limited their search to stretches of sequence known to be critical for catalytic activity. “Our screen was really fine-tuned to identify these mutations in very small regions of an enzyme,” Brognard explained.

They found 921 potentially relevant mutations, and identified several kinases with high frequencies of functional mutations across the samples. From these, the team chose to focus on an enzyme called MAP2K7, a component of the JNK pathway in which functional mutations were common among samples from patients with gastric cancer. “Most programs out there that would filter this data wouldn’t flag this enzyme up as being relevant based on the frequency of mutations,” Brognard says. “But when you look at the mutations occurring at very important residues, all of a sudden it becomes quite important.”

Then the team looked for mutations in other members of the JNK pathway. They found that mutations disrupted the JNK pathway in more than 20 percent of gastric tumors. When they studied the impact of MAP2K7 mutations on gastric cancer cells in the laboratory, they were able to demonstrate that in these cells, the pathway suppresses tumor growth.

Importantly, Brognard says, researchers can use the same tactic to search other families of enzymes for cancer-driving mutations. “These are broadly applicable approaches to really mine this enormous amount of cancer genomic data,” he says.