Finding relief in the aftermath of Hurricane Maria: A patient’s journey from Puerto Rico to the National Institutes of Health 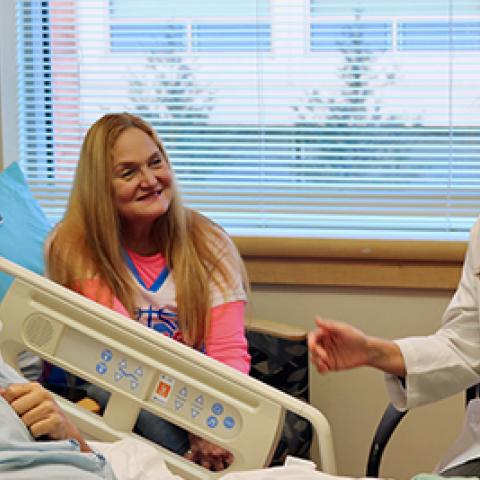 Jesus Garces-Soto and his wife, Lyssette Santiago, never expected to travel from Puerto Rico to the National Institutes of Health (NIH) in Bethesda, Maryland.

In 2013, Garces-Soto underwent an operation for bladder cancer in Puerto Rico. Although the operation was initially considered successful, doctors confirmed his cancer had recurred in April 2017 after he began to feel sick again. Urothelial carcinoma, also called transitional cell carcinoma, is cancer that starts in the urothelial cells lining the inside of the bladder. It is the most common type of bladder cancer and is often diagnosed at an early stage, when the cancer is easier to treat. Caught later, treatment is more challenging.

In the fall of 2017, on the same day that Hurricane Maria, a storm with 150-mile-per-hour winds, made direct landfall on Puerto Rico, Garces-Soto returned to the hospital to address an infection related to his cancer.

The timing of the infection could not have been worse. The hurricane immensely damaged the hospital and surrounding infrastructure. While the destruction made it difficult to provide adequate care, many patients had no choice but to stay in the facility as their homes had been severely damaged in the hurricane. “The hospital didn’t have electricity, and there was no working generator or air conditioning,” recalled Garces-Soto.

Garces-Soto and his wife were on a floor with other cancer patients, many of whom were in need of electricity to run the equipment they relied on for survival.

“The patient rooms were unbelievable – it was terrible,” Santiago said. “But we couldn’t return to our house because of the damage. We wouldn’t have had water.”

As a sportscaster and former reporter in Puerto Rico, Santiago was keen to use her talents to get word out about the devastating conditions and need for aid. “I used to write for the media, so I began writing to let people know what was going on and hopefully get attention from someone that could help us.”

Santiago’s efforts did not go unheard; she eventually connected with members of the American Cancer Society (ACS) Puerto Rico who were eager to help. Garces-Soto was soon discharged from the hospital and transferred to the ACS’ Puerto Rico Hope Lodge in San Juan. The Lodge, which provides free lodging for adults and children undergoing cancer treatment in Puerto Rico and surrounding islands, offered the couple temporary relief from the sweltering heat and dire conditions while they awaited news from ACS about where they could go next.

Members of ACS Puerto Rico worked with other ACS members in the United States to coordinate travel plans for Garces-Soto and Santiago to leave Puerto Rico. Initially, the couple heard they would travel to Moffitt Cancer Center in Florida. The good news, however, came with a major caveat: although Garces-Soto’s health plan included a category for costs associated with catastrophes, because he was in Puerto Rico, the funds could not be applied to a healthcare facility in the continental United States. The couple was devastated to learn they would need to cover the treatment expenses out-of-pocket. “We looked at each other, and we began to cry,” said Santiago. “But then, there was another phone call from the American Cancer Society.”

It was then that the couple was delivered a lifeline. Members of ACS and the National Cancer Institute (NCI) were calling to tell the couple that Garces-Soto could receive treatment while enrolled on a clinical trial at the NCI Center for Cancer Research (CCR) on the NIH campus free of charge. Less than a week later, Garces-Soto and Santiago were on their way to Bethesda.

The couple is able to stay at the Edmond J. Safra Family Lodge on the NIH campus while Garces-Soto receives treatment at the Clinical Center. Acting as a home away from home for families and loved ones of adult patients who are receiving care at the Clinical Center, the lodge provides space for solitude, family meetings and supportive fellowship.

“The health tragedies and emergencies that Puerto Ricans have endured and are still enduring due to Hurricane Maria are heartbreaking,” reflected Dr. Apolo. “It is wonderful that many cancer organizations, including the NCI, are able to help cancer patients continue to receive treatment despite overwhelming difficulties. I feel fortunate to be involved in this effort. Mr. Garces-Soto and his family have maintained such a positive attitude throughout these difficult times - a reflection of the strength and perseverance of the people of Puerto Rico.”

When asked about the best part of staying at NIH, both Garces-Soto and Santiago emphasized the large impact the staff have had on their stay. “The staff are the best – so caring and lovely,” said Santiago. “They even tried to speak Spanish!”

“That’s the best part – the people,” offered Garces-Soto. His face beamed as he added, “And the menu.”