Fearless in the face of small cell lung cancer 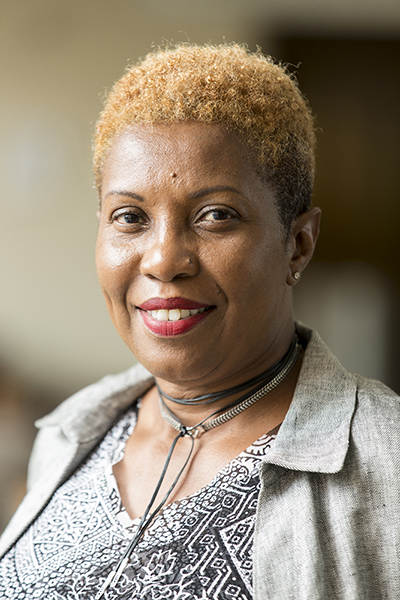 Yolland Jackson considers herself a soldier who is determined to fight her small cell lung cancer until the bitter end.
Photo credit: Daniel Sone

Yolland Jackson considers herself a soldier who is determined to fight her cancer until the bitter end. Now more than two years since she was diagnosed, Jackson remains optimistic in the face of small cell lung cancer (SCLC) - the most aggressive type of lung cancer.

Recently, Jackson shared her cancer journey as part of a panel on her church’s cancer ministry, something she would have normally shied away from. “I’ve always been shy and hated public speaking,” she says. “But this experience, this journey, has given me confidence. It’s so important that I share my story and encourage others to look into clinical trials.”

Jackson has big plans to continue advocating and sharing her story, and in the process, hopes to encourage more African-American patients to participate in clinical trials. “We need to build up connections between the medical community and African Americans,” she says. “More communication and outreach is needed to spread the word that clinical trials may not only help you but someone else - maybe even someone you love. You just have to be willing to take a chance.”

SCLC accounts for 10 to 15 percent of all lung cancer cases and affects over 30,000 patients every year in the U.S. alone. There are two main types of small cell lung cancer – small cell carcinoma or oat cell cancer, and combined small cell carcinoma – each named for the kinds of cells in the cancer and how the cells look when viewed under a microscope. Surgery, chemotherapy and radiation are standard treatment options, though for most patients these options do not cure their cancer. More than half of all patients with SCLC die within a year of diagnosis, and patients with an earlier stage of the disease rarely live more than two years after their diagnosis. Smoking is the number one risk factor of SCLC, and symptoms often include persistent coughing and trouble breathing.

In 2015, after experiencing discomfort while breathing for almost a year, Jackson expressed concern to her doctor. Her suspicion that something wasn’t right was confirmed when a CAT scan discovered four small lumps in her right lung, which was later diagnosed as small cell carcinoma. She was given no more than two years to live.

Despite the grim outlook, Jackson was intent on fighting and began chemotherapy and radiation therapy in July 2015. By January 2016, after 33 treatments of radiation, her tumors looked as if they had disappeared. Relief was short-lived, however, as four new tumors were found in her lymph nodes the following month.

It was there that she faced a dead end; she had received one too many treatments in the previous trial at Georgetown and was ineligible for treatment at Johns Hopkins. She felt she was out of options until Christine Hann, M.D., Ph.D., of Johns Hopkins Medicine, connected her to Anish Thomas, M.B.B.S., M.D., Investigator in the Center for Cancer Research’s Developmental Therapeutics Branch at the National Cancer Institute (NCI).

Dr. Thomas is a co-investigator on a phase II clinical trial studying a combination therapy for patients with advanced solid tumors at NCI. The trial involves administration of an immunotherapy drug once a month and an oral medication that participants take twice per day. This trial is unique in that it involves a pretreatment biopsy, which may help researchers understand which patients could benefit most from the treatment in future studies.

When Jackson arrived at NCI in the fall of 2016, the tumors on the right side of her neck had grown to the size of a baseball. Remarkably, within the first few weeks of treatment she could feel the lymph node on the right side of her neck begin to shrink and, by the third month, a post-treatment scan confirmed her tumors had completely disappeared.

“Dr. Thomas told me, ‘Something is going on, and it’s good,’” she says. “At first I attributed it to a miracle – I didn’t believe it!”

Before starting treatment at NCI, Jackson recalls telling Dr. Thomas, “This is bigger than me. This is happening to me because someone is going to come after me that will need this treatment. Whatever you need to do, I’m in.”

Dr. Thomas noted how Jackson remained hopeful yet realistic at the outset of the trial.

“She knew there were no guarantees and that this cancer had a very bad prognosis. At the same time, she was very optimistic and, in the event that the treatment didn’t work, wanted her participation to benefit others.”

Maintaining a positive outlook kept her going during the lowest points of her battle with SCLC. “The doom and gloom can really settle in on you, but you have to believe that it’s going to get better, all the way to the end,” she says. “When Dr. Hann referred me to Dr. Thomas’ trial – that’s when my journey began. Not all patients get this opportunity. I really thought it was all over after the chemotherapy and radiation failed, so this was truly a blessing.”

Presently, Jackson appears to be cancer-free, and she returns to NCI monthly to meet with Dr. Thomas and her research nurses, Linda Sciuto, R.N., B.S.N., O.C.N., Research Nurse Specialist in the Developmental Therapeutics Branch, and Rasa Vilimas, R.N., B.S.N., Research Nurse Specialist in the Thoracic and Gastrointestinal Oncology Branch, for treatment.

“Linda and Rasa are the sweetest nurses,” she says. “I never know when Linda is having a bad day because she’s always so compassionate. Dr. Thomas, Linda and Rasa were put in my life for a reason. I will never forget them, and I appreciate all of the kindness they’ve shown me throughout my treatments.”

Dr. Thomas believes that the information obtained from her pretreatment biopsy may allow researchers to determine why her tumors responded to the combination therapy – information which may benefit future patients.

“Ms. Jackson is truly a remarkable person, and I’m glad Linda, Rasa and I could be part of her journey,” said Dr. Thomas.