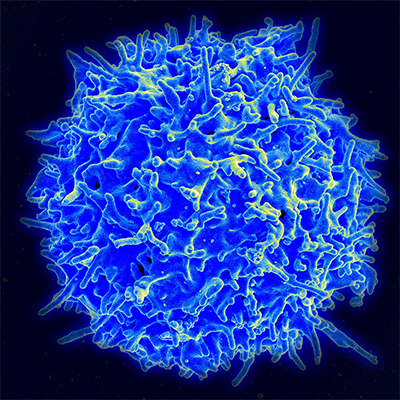 A new study, published August 13, 2018, in Cancer Cell, has uncovered the critical importance of a complex of proteins, called BATF3 and IRF4, in regulating a pro-growth and survival network in adult T-cell leukemia/lymphoma (ATLL). The results demonstrate that this network can be targeted with a class of drugs known as bromodomain-and-extra-terminal-domain (BET) inhibitors, suggesting a novel potential therapy for ATLL.

ATLL is a lymphoma caused by chronic infection with the human T-cell leukemia virus type 1 (HTLV-1). The virus can be spread through transfusions of tainted blood or breastfeeding by infected mothers, and infections are on the rise in parts of the world. The disease is not responsive to chemotherapy, and even targeted therapies, such as monoclonal antibodies, have not typically extended survival two years after diagnosis.

To better understand the biology of ATLL in the hopes of identifying new therapeutic strategies, CCR researchers and colleagues led by Louis M. Staudt, M.D., Ph.D., and Thomas A. Waldmann, M.D., co-Chiefs of the Lymphoid Malignancies Branch, used a technique known as RNA interference that can identify a loss of function in specific genes, which includes genes that regulate proliferation and survival of ATLL cells. The examination revealed that two transcription factors, BATF3 and IRF4, controlled a vast gene regulatory network that defines the hallmark features of ATLL, without which the malignant cells stop proliferating and die.

Among the key genes controlled by BATF3 and IRF4 is the oncogene Myc. Silencing BATF3 and IRF4 decreased Mycexpression, but overexpression of Mycpartially protected ATLL cells from the loss of BATF3 and IRF4. In addition to Myc, the investigators identified 68 direct BATF3/IRF4 target genes, including BATF3 itself. These target genes can set up a loop that continuously reinforces the amplification, or an increase in the number of copies of a gene or its protein products, of this key transcription factor.

But how, the researchers wondered, does the HTLV-1 virus regulate the BATF3/IRF4 network? Intriguingly, only one HTLV-1 protein, HBZ, is expressed in studied cases of ATLL, suggesting it plays an important role in the disease. Knocking down HBZ dramatically decreased the number of live cells and reduced the expression of BATF3/IRF4 network genes. Importantly, HBZ directly regulated BATF3, helping to explain why silencing HBZ killed the ATLL cells.

Finally, the investigators considered ways to exploit these insights therapeutically. The investigators discovered that BATF3, like many master regulatory transcription factors, directly regulates gene expression by contributing to “super-enhancers,” which are extensive regions in the genome that are bound by clusters of transcription factors that enhance expression of nearby genes. The chromatin protein BRD4 is essential for super-enhancer function and can be prevented from interacting with super-enhancers by a class of drugs known as BET protein inhibitors. The investigators found that one such BET inhibitor, JQ1, was toxic to ATLL cells. Moreover, BET inhibitor treatment of patient ATLL samples and of mice with implanted ATLL tumors also reduced cell and tumor growth, respectively.

“We found an essential network in ATLL cells,” says Dr. Staudt. “We showed it is controlled by an oncogenic virus, and that a small-molecule class of therapeutics, which are being evaluated in clinical trials, could be used to modulate this network. We propose these drugs should be evaluated extensively in ATLL.”