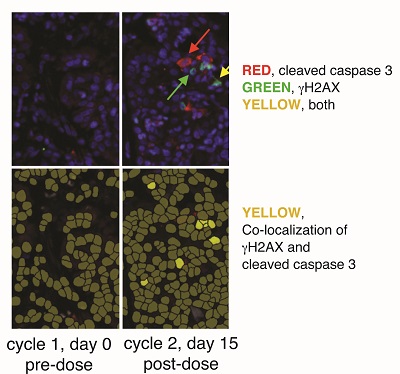 Immunofluorescent detection of gamma-H2AX in tumor biopsies suggested early apoptosis, and co-localized with cleaved caspase 3. This assay was performed on tumor biopsies taken prior to birinapant administration, and within 24 hours after the sixth dose.

While ovarian cancer is fairly uncommon, comprising 1.3 percent of new cancer diagnoses in the U.S., the disease is actually the fifth leading cause of cancer-related deaths in U.S. women. Ovarian cancers are usually diagnosed after they have spread beyond the ovary because of a lack of early symptoms or effective screening tests. Treatment options include standard surgery, radiation, and chemotherapy, as well as targeted therapy for certain patients. Unfortunately, many women experience disease recurrence, and new treatments aimed at these chemoresistant cancer cells are needed.

Apoptosis, or programmed cell death, is a well-controlled pathway that normally eliminates damaged cells but is often dysregulated in cancer. In fact, defective apoptosis has been linked to chemoresistance. The protein second mitochondria-derived activator of caspases (SMAC) degrades cellular inhibitors of apoptosis proteins (cIAPs), which bind caspases and prevent apoptosis. SMAC mimetics are drugs designed to bind cIAPs, allowing caspase activation and cell death, and have shown activity in preclinical cancer models. Thus, Christina M. Annunziata, M.D., Ph.D., of CCR’s Women’s Malignancies Branch, and her colleagues hypothesized that the SMAC mimetic birinapant could be effective for women with chemotherapy-refractory or -resistant ovarian cancer.

The researchers enrolled onto their phase 2 clinical trial (NCT01681368) a total of 11 women with recurrent ovarian cancer whose disease had progressed while receiving or within six months of completing platinum-based chemotherapy. Patients had a median age of 59 years and had received a median of 5 prior therapies. Eighty-two percent of the patients were white. The investigators administered birinapant intravenously on days 1, 8, and 15 of 28-day cycles until a patient’s disease progressed. They measured the response to birinapant with computed tomography scanning every two cycles and followed birinapant levels and distribution by collecting blood and tumor biopsies.

The best response to birinapant was disease stabilization of four and five months in two patients. The drug was well tolerated with mostly grade 2 adverse events, including one case of Bell’s palsy that resolved with steroid treatment, one case of grade 3 lymphopenia, and no grade 4 or 5 adverse events. The scientists detected birinapant in both blood plasma and tumor tissues, and their data suggested the drug remained in the tumor much longer than in the plasma.

The investigators then examined the effect of birinapant on the apoptotic pathway in blood and tumor cells. They saw a rapid decrease in cIAP1 levels along with a decrease in procaspase 3, a marker of apoptosis induction, in peripheral blood cells. Tumor samples showed a similar drop in these two proteins. In two pairs of pre- and post-treatment biopsy samples, the scientists observed an increase in cells positive for both cleaved caspase 3 and phosphorylated H2A histone family member X (γH2AX) after birinapant treatment, suggesting activation of the apoptotic pathway.

Finally, the researchers determined whether birinapant affected blood immune cell or cytokine levels since the drug is proposed to affect nuclear factor κ B signaling, an important pathway in immune cells. They observed reduced T cell and B cell numbers with no change in natural killer cells. They also saw a trend toward increasing tumor necrosis factor-α levels but no trend for the other cytokines examined.

Together, these data show that birinapant alone is unable to reduce the tumor burden of women with recurrent ovarian cancer. The drug’s ability to stimulate apoptosis and its tolerability, however, suggest it may be amenable to combinations with other anticancer therapies.