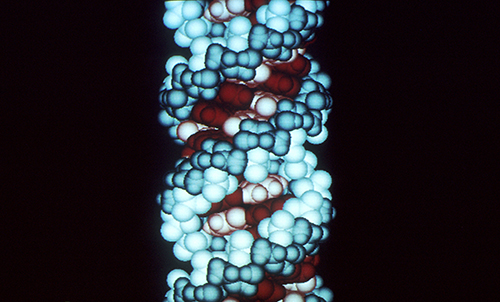 CCR scientists studying liver cancers have found that the levels of RNA-binding proteins are often dramatically different in tumor cells than they are in healthy cells. Such changes, they say, may lead to widespread disruptions in the RNA molecules, shown in this photo, produced by the cell—a situation that is often found in tumor cells.
Photo Source: National Cancer Institute

Human cells produce hundreds of proteins that bind to specific RNA molecules to regulate their function or abundance. In doing so, they impact a wide range of RNA-regulated processes and help determine which proteins a cell manufactures. Now, CCR scientists studying liver cancers have found that the levels of RNA-binding proteins are often dramatically different in tumor cells than they are in healthy cells. Such changes, they say, may lead to widespread disruptions in the RNA molecules produced by the cell—a situation that is often found in tumor cells.

In a study published July 10, 2017, in Cancer Cell, a research team lead by Xin Wei Wang, Ph.D., Deputy Chief of CCR’s Laboratory of Human Carcinogenesis, examined the effects of excess levels of negative elongation factor-E (NELF-E), one of the RNA-binding proteins they found to be most severely disrupted in aggressive liver cancers. Their experiments in cells and mice demonstrate that NELF-E enhances signaling of the oncogene c-Myc to promote cancerous growth. Disrupting NELF-E’s interactions with its RNA targets or the c-Myc protein could be a strategy for new anti-cancer therapies.

Wang says that although cancer is generally thought to be driven by changes in a handful of genes, it is very common to find tumor cells in which the levels of thousands of RNAs—both messenger RNAs, which serve as gene-specific templates for protein production, and non-coding RNAs, which may serve regulatory functions—differ from those in healthy cells. “I think there must be a reason—that in tumor evolution, there’s a need to select for those tumor transcriptomes,” he says. (A transcriptome refers to the full set of RNA molecules inside a cell.)

He and his colleagues wanted to investigate whether RNA-binding proteins might be responsible for tumors’ characteristically distorted transcriptomes. Hien Dang, Ph.D., a postdoctoral fellow in Wang’s lab, analyzed hundreds of hepatocellular carcinomas, comparing them to adjacent non-tumor liver samples from the same patients. “More than 70 percent of known messenger RNA-binding proteins were dysregulated in the tumor cells. Such a dramatic change was most prominently observed among patients with aggressive cancers,” she says.

According to the analysis, hundreds of RNA-binding proteins were disrupted in the tumor cells. From these, the team selected NELF-E, which showed especially dramatic differences between tumor and non-tumor cells, for further study. In a series of experiments in cells and animals, they showed that NELF-E enhances the activity of c-Myc, a growth-promoting gene that is often overactive in cancer cells. This in turn increases the activity of genes regulated by c-Myc and promotes liver cancer progression.

Until now, NELF-E has been known for its fundamental role in the elongation of messenger RNAs as they are transcribed from genes. Its newly discovered ability to boost the activity of specific sets of genes and drive tumor growth has several clinical implications. “We are currently exploring whether the activity of NELF-E’s targets can predict patients’ prognosis—not just in liver cancers, but in many cancer types,” she says. And with further research, it may become possible to design new therapies that slow cancer growth by blocking NELF-E’s interaction with its targets.

More broadly, Wang suspects RNA binding proteins may contribute to the transcriptome imbalances present in all kinds of cancer. “Disruption of RNA homeostasis could be an emerging hallmark of cancer,” he says.