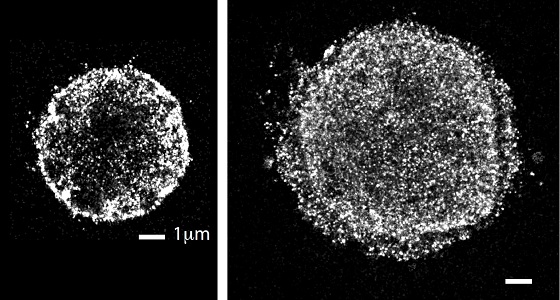 Nanoscopy images of a B lymphocyte nucleus before (left) and after (right) it becomes activated. In the inactivated cell, histone proteins (bright white specks) congregate at the nuclear membrane, holding their associated strands of DNA in a tightly compact formation that restricts gene transcription. In contrast, activated cell nuclei grow in size and these same proteins decompact and spread throughout the nucleus, enabling increased gene transcription.

A new study published August 10, 2017, in Molecular Cell reveals how changes in the architecture of the nucleus can enable B lymphocytes to spring to action during an immune system attack and help fight infection. The discovery could lead scientists to a better understanding of how some tumor cells, especially blood cancer cells, make similar transitions from a dormant to an active state.

B lymphocytes are a type of white blood cell that play an integral role in the immune response. When a pathogen enters the body, B lymphocytes usually recognize the intruders and release antibodies to combat the infection. It has been unclear, however, exactly what cellular changes occur that enable B lymphocytes to transition to this active state.

A team of scientists from 15 laboratories, including those at NCI’s Center for Cancer Research and the National Institute of Arthritis and Musculoskeletal and Skin Diseases, both part of the National Institutes of Health, has now discovered that the chromatin of B lymphocytes undergoes several architectural changes during activation. Chromatin is the name given to chromosomal DNA wrapped around proteins, called histones, which help compact DNA inside the cell nucleus.

The observed architectural changes ultimately loosen the packaging of DNA inside the cell nucleus, making genes more accessible for transcription into RNA and then translation into proteins, such as antibodies, that can attack sources of infection.

“It’s important to understand these details of the cell cycle,” said one of the study’s principal investigators Rafael Casellas, Ph.D., Adjunct Investigator in CCR’s Laboratory of Cancer Biology and Genetics and Chief of the Genomics and Immunity Section of the National Institute of Arthritis and Musculoskeletal and Skin Diseases. “Because the more we understand how cells transition into an active state, the more we can understand how tumor cells develop.”