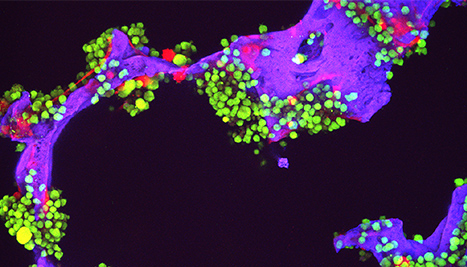 This image shows myeloma tumor cells (in green) and bone cells (red) growing on a scaffold made of silk protein (purple), which is designed to resemble bone material.
Photo courtesy of NCI Visuals Online

CCR researchers led by James Kochenderfer, M.D., an Investigator in the Experimental Transplantation and Immunology Branch, conducted the first clinical trial of immune system T cells expressing a chimeric antigen receptor (CAR) targeted against a protein found on multiple myeloma cells. Infusing a high dose of these CAR T cells induced remissions, some of which were ongoing as of May 2018, in patients with advanced multiple myeloma. The results of the trial were published May 29, 2018, in the Journal of Clinical Oncology.

In CAR T-cell therapy, a patient's T cells are removed from his or her blood. The cells are modified in the laboratory by adding a gene for a special receptor, or CAR, that binds to a certain protein on the patient’s cancer cells. Large numbers of the CAR T cells are grown in the laboratory and then given to the patient by infusion. CAR T cells directed against other proteins have been used to treat lymphoma and leukemia, but this is the first trial to target multiple myeloma.

“Multiple myeloma is almost always incurable, so new treatments are needed,” said Kochenderfer. “CAR T-cell therapy is totally different than any other multiple myeloma treatment, and we showed it can have activity even in patients who had a very large number of prior therapies.”

The investigators treated 24 patients with varying doses of CAR T cells. They found that the 16 patients given the highest dose, who had undergone between three and 19 prior different types of treatments, had the best response to CAR T cells. Thirteen of these patients showed at least some reduction in the number or activity of myeloma cells, and 10 had very good or complete remissions. Six of the patients continue to experience a reduction of disease, the longest of which has lasted more than a year. All patients treated with the high dose of CAR T cells, however, experienced significant immune-related toxicity, which was higher for patients with a greater number of myeloma cells in the bone marrow.

To improve on their therapy, the researchers plan to conduct future clinical trials with slightly modified CAR T cells. One swaps a small mouse protein region of the receptor for a human one. “We hope that having a receptor made of all human protein sequence will be less toxic. It is definitely exciting,” said Kochenderfer.