Brachyury Essential for Notochord Cell Fate, Not Proliferation or EMT 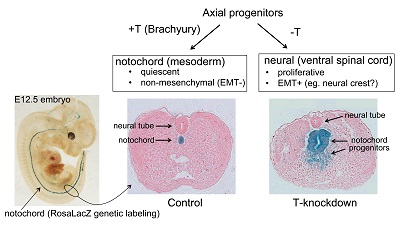 The Brachyury or T gene encodes a transcription factor that is essential for body axis elongation during embryonic development. T is also highly expressed in chordomas, rare sarcomas derived from notochord cells, and a number of additional tumor types, including lung, prostate, and colon cancers. T promotes epithelial-mesenchymal transition (EMT) and cell migration during axis elongation, and it has been suggested that T may also participate in tumor progression by virtue of this role. In the naturally occurring T-gene deletion mutant, the dramatic axis truncation phenotype and early embryonic lethality have precluded an in-depth analysis of T function in notochord development or in other tissues. Consequently, Susan Mackem, M.D., Ph.D., of CCR’s Cancer and Developmental Biology Laboratory, and her colleagues decided to produce a tissue-specific, conditional T-knockdown mouse model to address this important issue and potentially gain insights into its role in cancer.

In their model, production of a T-targeting short hairpin RNA (shRNA) using a notochord-selective Cre recombinase caused efficient T knockdown in notochord progenitor cells. Loss of T transcripts and protein in the notochord were complete by embryonic day 10.5-11.5. The researchers found that the extent of T protein loss correlated with the severity of observed skeletal defects, which ranged from the complete loss of vertebrae below the neck level to tail truncations. When examining the cell signaling pathways in the knockdown embryos, the investigators found that sustained T expression was required for expression of Shh, a signal secreted from notochord and critical for inducing development of the vertebral column from somites.

Using reporter genes to label and track notochord progenitor cells, the scientists discovered that these cells survived in the absence of T, forming large epithelial tube structures and mesenchymal cell aggregates. The cells in the tubular structures expressed Nestin and Sox2, markers of neural tube rather than normal notochord, suggesting they had adopted a neural cell fate. This observation is consistent with a model that notochord and neural tube arise from a common progenitor and indicates that sustained T expression maintains a functional notochord and notochord cell fate.

Taken together, these results contradict expectations from previous studies associating T expression with oncogenesis, and reveal an essential role for T in notochord cell fate and function but not in survival, proliferation, or EMT of notochord progenitors. Importantly, these data raise important questions about the value of targeting T for cancer therapy. Understanding the role that T plays in cancer, particularly chordoma, will require further investigation.