A novel mRNA modification may impact the human genetic code 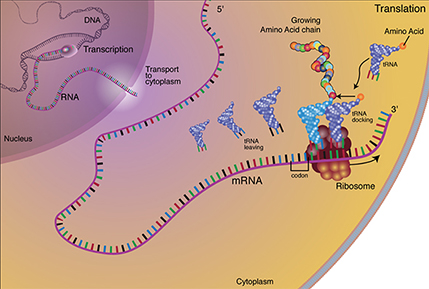 The process of translation
Illustration by Darryl Leja, NHGRI

Researchers at CCR identified a novel modification in human messenger RNA (mRNA) that dramatically impacts gene expression. NAT10, an enzyme, was found to be responsible for the modification, which itself has been implicated in cancer and aging. This is one of the first examples of a unique chemical modification to mRNA (a key factor in deciphering the genetic code) that causes an increase in protein production. The study, by Shalini Oberdoerffer, Ph.D., Investigator in the Laboratory of Receptor Biology and Gene Expression, and colleagues, appeared November 15, 2018, in Cell.

Deciphering the genetic code is a multi-step process that begins with transcribing information contained within DNA to a messenger RNA; the resulting mRNAs are then translated into proteins that comprise key components of the cell. It is known that RNA can be uniquely modified following the transcription process as a means to regulate function. This study provides a first example of a chemical modification to mRNA that enhances protein production. The investigators suggest the modification alters the efficiency by which the genetic code is read within each strand of mRNA.

The researchers focused on a specific chemical modification to mRNA, N4-acetylcytidine (ac4C). They first mapped the presence of ac4C to thousands of human mRNAs. In the lab the scientists next determined that the presence of ac4C within mRNAs powerfully enhanced their ability to be translated into protein. They further demonstrated that ac4C impacted cell proliferation, a hallmark of cancer cells.

“We hope to one day harness this discovery to specifically direct the modification to key mRNAs, thereby creating novel therapeutics,” said Dr. Oberdoerffer.

The researchers’ next steps are to map out how the modification specifically functions to alter gene expression as well as to determine if misregulation is a root cause of certain diseases.