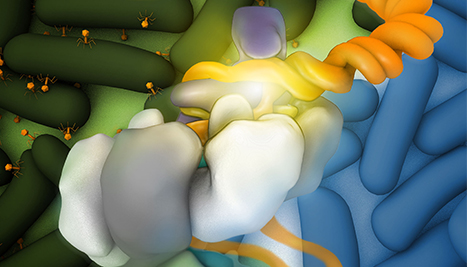 Structural schematic of the Type I-F CRISPR surveillance complex (Csy) from Pseudomonas aeruginosa bound to invading phage DNA (orange). The Csy complex creates a fork in the DNA with its hook (purple) and prepares it for degradation in order to protect the bacterium from infection. The complex is overlaid on a field of healthy (blue, background) and virally infected (green, background) bacteria.
Credit: Veronica Falconieri, Subramaniam Lab, CCR, NCI, NIH

Using the Nobel-prize winning technique of cryo-EM, researchers led by CCR Senior Investigator Sriram Subramaniam, Ph.D., have captured a series of highly detailed images of a protein complex belonging to the CRISPR system that can be used by bacteria to recognize and destroy foreign DNA. The images reveal the molecule’s form before and after its interaction with DNA and help illuminate both how the complex functions and how it can be blocked.

In recent years, CRISPR has become a powerful tool for genome editing. But long before scientists were using the system to precisely modify DNA, bacteria were using CRISPR to protect themselves against viruses and other foreign invaders. A surveillance complex that recognizes foreign DNA and then triggers its destruction is key to this defense system.

In a new study, reported October 5, 2017, in Cell, Subramaniam and his team collaborated with Memorial Sloan Kettering Cancer Center biologist Dinshaw Patel, Ph.D., to investigate the structural basis of a CRISPR surveillance complex’s interaction with DNA—as well as how anti-CRISPR proteins produced by a viral invader block the system’s ability to recognize its target. The lead authors of the study are post-baccalaureate student Tai Wei Guo, CCR Associate Scientist Alberto Bartesaghi, Ph.D, and Hui Yang, Ph.D., a postdoctoral fellow at Memorial Sloan Kettering.

Biologists often study protein structure by using X-rays to capture a detailed image of the protein in a crystallized form. But many biological molecules undergo conformational changes that are key to their function, and for researchers to learn how these molecules work, it’s important to visualize them in all of their states.

To illuminate how various proteins and protein complexes change their shapes in response to interactions with other molecules, Subramaniam and his team turned to cryo-electron microscopy (cryo-EM). Thanks to technical advances made by Subramanian’s team and others, cryo-EM can produce images with a resolution comparable to that obtained with X-ray crystallography but without the need to crystallize molecules for study.

“This allows us to image molecules in action and really explore what happens,” Subramaniam explains.

Using cryo-EM, the team generated images that show how the CRISPR surveillance complex, used by the bacterium Pseudomonas aeruginosa, undergoes a dramatic shape change when it binds to DNA, unwinding its slightly twisted form. The shift probably helps trigger destruction of the target DNA, the researchers say. They also produced images that show different ways viral proteins can block the surveillance complex’s interaction with DNA and its subsequent conformational shift, thereby helping an invader elude detection. Having a pinpoint understanding of these interactions will be vital in designing new antibiotics and other treatments.