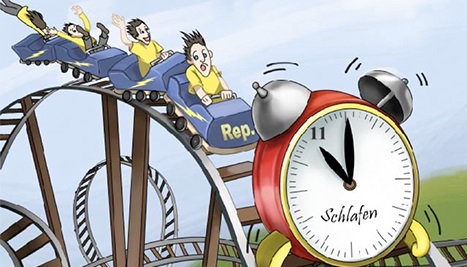 The above cartoon illustrates how SLFN11—whose name derives from schlafen, which means “sleep” in German—acts like an alarm clock against abnormal DNA replication in a DNA-damaged cell. Once the alarm goes off, stressed DNA replication, represented by the rollercoaster, comes to a halt, ultimately killing the cell.

Whether patients’ cancer cells express the gene encoding the SLFN11 protein strongly predicts their response to an array of DNA-targeted drugs. Cancer cells expressing SLFN11, which is about half of cancers, are more likely to respond to these DNA-targeted drugs than those that don’t express SLFN11, suggesting that these drugs recruit SLFN11 to kill cancer cells. But how this happens has remained unclear.  Now, Center for Cancer Research investigators have uncovered the mechanism of how SLFN11 kills cancer cells. Their findings appeared Feb. 1, 2018, in Molecular Cell.

Replication starts at DNA regions known as origins of replication. Proteins bind to the origins and pull the DNA strands apart, creating two Y-shaped openings, or replication forks. As replication progresses, the forks move in opposite directions. The new study, led by Yves Pommier, M.D., Ph.D., Chief of the Developmental Therapeutics Branch, and Junko Murai, M.D., Ph.D., a Research Fellow in his lab, shows that SLFN11 interferes with this process in cells treated with DNA-damaging drugs.

In other words, SLFN11— whose name derives from schlafen, meaning “to sleep” in German—“is like an alarm clock,” Pommier says. “Once SLFN11 is engaged, the cells stop replicating and die.” Similar to how p53, nicknamed “the guardian of the genome,” kills cells with irreparable DNA damage, SLFN11 acts as “a new guardian of the genome” by killing cells with replication that is disrupted by DNA damage. Considering the approximately 50 percent frequency of SLFN11 inactivation in cancer cells, SLFN11 expression can be viewed as an efficient biomarker to predict responder and non-responder to DNA damaging anti-cancer drugs, Murai and Pommier say.

Unravelling how SLFN11 does this is important to understand how broadly used DNA-damaging anti-cancer drugs work. This understanding could enable physicians to better stratify patients based on who would be most responsive to DNA-damaging drugs and potentially offer an effective treatment course for them soon after a diagnosis.