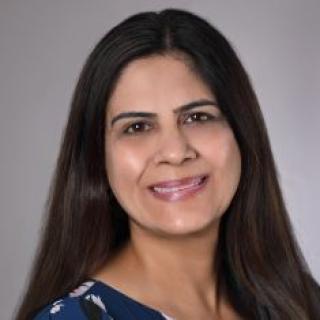 Anupam Verma is a pediatric oncologist with a research focus on designing and conducting early phase clinical trials using immunotherapies for children, adolescents, and young adults with high risk pediatric acute leukemias. She is specifically interested in optimizing outcomes for children with Down Syndrome who develop leukemia. Additional areas of interest include: 1) studying and advocating for diversity, equity, and inclusion not only in patient care but among healthcare providers; 2) working with trainees to foster equitable opportunities for career development across all demographic sectors.

Dr. Verma’s research interests focus on translational and clinical research to treat high risk childhood, adolescent, and young adult acute leukemias. She has experience in clinical trial development through involvement in the myeloid disease committee of Children’s Oncology Group (COG) and Therapeutic Advances in Childhood Leukemia and Lymphoma (TACL) consortia. She currently chairs a multi-institutional Phase I/IIb first in pediatrics trial with PD-1 checkpoint inhibitor Nivolumab in relapsed refractory acute myeloid leukemia (AML). She is also a study committee member of various clinical trials at COG and TACL, notable being the umbrella Phase II trial for relapsed acute lymphoblastic leukemia (ALL) patients through COG utilizing Blinatumomab in combination with Nivolumab and chemotherapy and a Phase I Study of Tagraxofusp, a protein-drug conjugate that targets CD123 in relapsed or refractory CD123 expressing hematologic malignancies conducted by TACL. Additionally, she is interested in improving outcomes for children with Down Syndrome who develop acute leukemia and ensuring their access to novel therapeutics. Dr Verma will also provide clinical and research support to the various chimeric antigen receptor therapy (CAR-T) trials to treat high-risk hematologic malignancies in pediatric patients in the pediatric oncology branch in Dr Shah’s team. Besides her work in leukemia, her research focus will also explore the disparities in race and ethnicity in healthcare and address ways to overcome obstacles.

PEGylated E. coli asparaginase desensitization: an effective and feasible option for pediatric patients with acute lymphoblastic leukemia who have developed hypersensitivity to pegaspargase in the absence of asparaginase Erwinia chrysanthemi availability 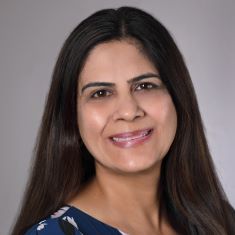 Dr. Verma received her M.B.B.S. in 1996 and M.D. in 2000, in Pediatrics at M S University of Baroda Medical College in India. She thereafter was a Senior Registrar in Hematology Oncology at All India Institute of Medical Sciences (AIIMS), in New Delhi, India. Pursuing her research interests, she immigrated to USA where she received MD in Pediatrics in 2005, as well as was Chief Resident at Brookdale University Hospital Medical Center, Brooklyn, New York. She served in an underserved area at Eastern Maine Medical Center in Bangor, Maine till 2009 where she was also an adjunct Assistant Professor at Tuffs University. She subsequently completed a fellowship in Pediatric Hematology Oncology at University of Utah in 2012, where she served as faculty as Associate Professor and continues to serve as an adjunct. In 2022 she joined the Pediatric Oncology Branch, Hematologic Malignancies Section as a Staff Clinician (Associate Research Physician). She is member of multiple societies, including the American Society of Hematology, Children’s Oncology Group, Therapeutic Advances in Childhood Leukemia & Lymphoma consortium. Dr. Verma is board certified in General Pediatrics and Pediatric Hematology Oncology.