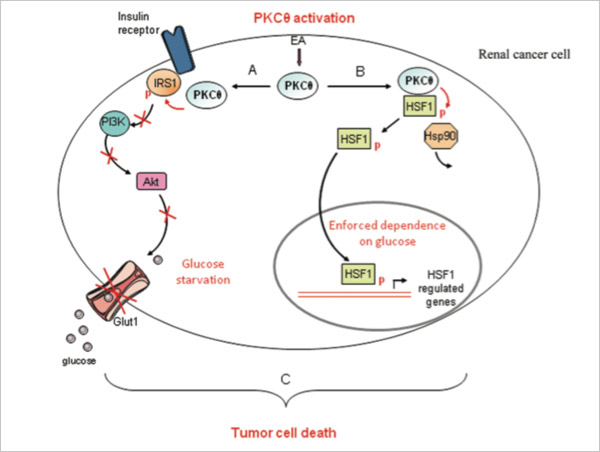 While overall cancer death rates continue to decline in the U.S., mortality rates for certain cancer sites, including the kidney, are on the rise. New treatments are needed to reverse this trend and one potentially rich source is natural products, compounds derived from living organisms. John Beutler, Ph.D., and his colleagues, in CCR’s Molecular Targets Laboratory located at the NCI campus in Frederick, Maryland, identified englerin A from an extract of the African plant Phyllanthus engleri that was particularly toxic to kidney cancer cells. To further investigate the activity of englerin A, the Beutler group teamed up with researchers led by Marston Linehan, M.D., and Len Neckers, Ph.D., in CCR’s Urologic Oncology Branch.

The scientists first determined the toxicity of englerin A against a panel of kidney cancer cell lines with distinct genetic mutations representing three important kidney cancer subtypes: VHL-deficient clear cell (sporadic Renal Cell Carcinoma; RCC), fumarate hydratase-deficient type 2 papillary (Hereditary Leiomyomatosis and RCC) and FLCN-deficient (Birt-Hogg-Dubé syndrome). Treatment with englerin A significantly reduced the number of viable cells in all three subtypes. Cells in which the wild type (normal) copy of the gene was restored, however, were insensitive. Furthermore, englerin A was not toxic to two nontumor derived kidney cell lines. Breast and prostate cancer cells showed an intermediate sensitivity to the compound.

Since englerin A was newly discovered, its mechanism of action was unknown, so the researchers used computer software to compare the structure of englerin A to that of drugs with known targets to identify potential englerin A target proteins. Of 15 suggested targets, half were members of the protein kinase C (PKC) family, which led the investigators to test englerin A’s ability to modulate PKC activity. Using a pan-PKC kinase assay, which does not distinguish between PKC family members, the scientists showed that englerin A increased PKC kinase activity dose-dependently.

To establish which PKC isoforms were stimulated by englerin A, the researchers silenced specific isoforms in kidney cancer cells and then determined the cells’ sensitivity to englerin A. Only loss of PKCθ could rescue the cells from englerin A toxicity. Further studies with purified PKC proteins showed that englerin A stimulated PKCθ-mediated phosphorylation of its substrate IRS-1 but had no effect on the activity of the structurally similar PKCδ. The investigators also showed that englerin A could block the binding of a known PKCθ activator, supporting the idea that PKCθ is a bone fide englerin A target.

IRS-1 plays an important role in insulin receptor signaling, and elevated phospho-IRS-1 is associated with insulin resistance. Since cancer cells depend heavily on glucose, the researchers wondered whether englerin A’s cancer cell toxicity was due to induction of an insulin resistant phenotype. Treating kidney cancer cells with englerin A decreased the activity of Akt, a kinase downstream of the insulin receptor, and loss of PKCθ expression restored Akt activity. Englerin A also reduced glucose uptake and cellular ATP levels. Interestingly, englerin A was more toxic to the cancer cells than was an inhibitor of the glucose transporter, Glut1, even though both inhibited glucose uptake to the same extent, suggesting that englerin A has an additional mode of activity besides reducing glucose uptake.

All the studies thus far were carried out with isolated cells. To see whether the compound was effective in animals, the scientists treated mice bearing kidney cell tumors with englerin A or a placebo. Englerin A prevented tumor growth and, in the tumors, enhanced IRS-1 phosphorylation and reduced Akt activity. Englerin A also reduced the growth of prostate cell tumors in mice, though to a lesser degree, consistent with the compound’s effectiveness in cell lines.

Because englerin A appeared to be a promising anticancer compound but had the ability to induce insulin resistance, the researchers wondered whether it would elevate blood glucose levels in treated animals. Surprisingly, the tumor-bearing mice given englerin A had significantly lower blood glucose levels than placebo-treated mice. Previous studies had shown that this phenomenon was linked to higher levels of the heat shock protein HSP70, and both plasma and tumor HSP70 levels were elevated in englerin A-treated animals. The investigators then found that HSF1, a transcription factor that regulates the HSP70 gene, was activated by englerin A and that silencing of PKCθ prevented HSF1 activation.

HSF1 is recognized as a facilitator of tumor growth. To determine whether activated HSF1 hindered englerin A’s anticancer activity, the researchers treated kidney cancer cells with either englerin A, the HSF1 stimulator BGP-15, or both. Unexpectedly, the combination treatment enhanced englerin A’s toxicity. This result led the scientists to hypothesize that the elevated toxicity was due to simultaneous PKCθ-mediated insulin resistance and HSF1-stimulated glucose dependence, as demonstrated by other researchers. In support of this idea, treating kidney cancer cells grown in low glucose with englerin A and BGP-15 markedly enhanced cell death.

These results suggested that englerin A toxicity depends upon HSF1 as well as PKCθ. In support of this idea, the investigators showed that loss of HSF1 in kidney cancer cells blocked cell death induced by englerin A alone or with BGP-15. Likewise, only expression of HSF1 and PKCθ together could sensitize a non-transformed kidney cell line to englerin A. Through binding assays the researchers found that PKCθ and HSF1 form a complex and that in the presence of englerin A, PKCθ phosphorylates and activates HSF1.

This research has identified PKCθ as a novel anticancer target with the ability to induce insulin resistance while at the same time rendering tumor cells even more dependent on glucose. By activating this unique enzyme, englerin A delivers two powerful blows to glucose-dependent kidney cancer cells.