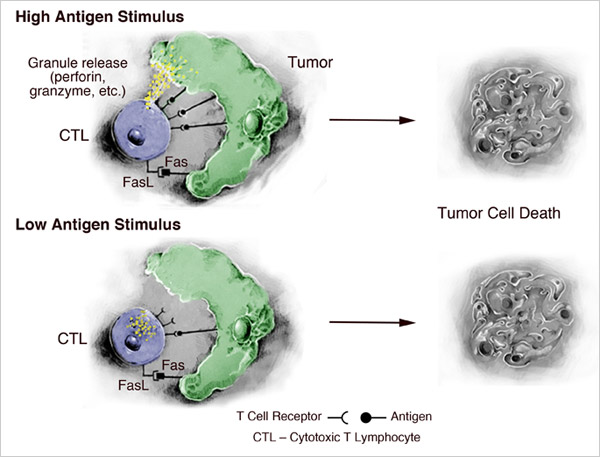 One approach to cancer immunotherapy, as opposed to therapeutic vaccination, is the transfusion of large numbers of tumor-specific killer T cells (cytotoxic T cells or CTLs) into patients. The body’s own defense killer T cells are a subgroup of T lymphocytes (a type of white blood cells) that are capable of inducing death in tumor cells. CTLs can cause the death of target cells either by releasing granules containing toxic molecules including perforin, or by producing a membrane protein called Fas ligand (FasL) which on interaction with the tumor cell results in cell death.

This cell transfer method, called adoptive T-cell therapy, is being optimized and tested in a number of clinical trials. However, some patients do not respond fully to the treatment. So, it is important to understand the mechanism(s) by which the CTL can achieve tumor eradication in vivo. In this context, the relevance of perforin- and FasL-mediated cell killing pathways need to be better understood.

As reported in a recent issue of Cancer Research, CCR postdoctoral fellow Anil Shanker, Ph.D., and colleagues in the Laboratory of Experimental Immunology, collaborated with a Japanese researcher to investigate the importance of the perforin and FasL pathways using a mouse model of renal cell carcinoma (Renca) expressing a surrogate tumor antigen called hemagglutinin (HA). They found that following subcutaneous injection of these Renca-HA cells, mice that had functional FasL but lacked perforin resisted tumor growth, whereas mice that produced perforin but lacked functional FasL rapidly succumbed to tumor. Similarly, mice with functional FasL formed significantly fewer lung metastases compared with mice having mutated dysfunctional FasL. Furthermore, administration of a FasL-blocking monoclonal antibody to normal mice increased numbers of lung metastases of tumor. Thus, the expression of functional FasL in the host seemed crucial for resisting the development of HA-expressing solid tumors. Adoptive transfer of CTL derived from genetically-modified mice lacking functional FasL were much less efficient in rejecting tumors than the same CTL from perforin-deficient mice.

To further probe the molecular basis for differences between FasL- and perforin-mediated antitumor activities, the authors adjusted the levels of HA antigen presented by the tumor cells. They found that Renca, as well as a range of other tumor cells, pulsed with low concentrations of the immunogenic HA peptide were preferentially killed by FasL, whereas at higher concentrations both FasL and perforin were equally effective. Thus, the two pathways by which T cells accomplish tumor cell killing acted differently, and were not functionally redundant. FasL being the only lytic pathway of the CTL selectively triggered by tumors containing low levels of antigen. Interestingly, a number of human renal cancer cell lines were also susceptible to FasL-mediated cytotoxicity.