The Art of Interpreting Epigenetic Activity 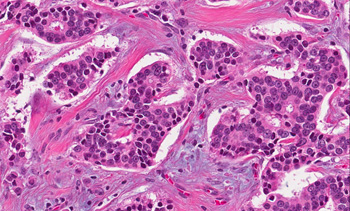 These ER+ breast cancer cells preserved epigenomic determinants that may be prognostic for cancer survival.

Even though all the cells of the human body share a common genomic blueprint, epigenetic activity such as DNA methylation, introduces molecular diversity that results in functionally and biologically different cellular constituents. In cancers, this ability of epigenetic activity to introduce molecular diversity is emerging as a powerful classifier of biological aggressiveness.

To better understand the relationship between a cancer cell’s epigenetic activity and its phenotype, Keith Killian, M.D., Ph.D., working with Paul Meltzer, M.D., Ph.D., in CCR’s Genetics Branch, undertook a large-scale analysis of DNA methylation patterns in primary invasive breast cancers to see what changes developed over time when compared with the epigenetic state of normal mammary tissue. In particular, the researchers compared breast cancers to micro-dissected normal breast lobules—the structural and functional part of the mammary gland that is generally considered the place where breast carcinomas originate. The team’s analysis was able to identify a baseline DNA methylation pattern using normal tissue from numerous unrelated patients. The scientists were then able to create an index and rank cancers in terms of how much they deviated from a “normal” baseline breast methylation profile. They called this index an MDI (methylation deviation index).

Even when a cancer phenotype has developed an altered methylation pattern, the fidelity with which it can repeatedly copy this new pattern during disease progression is not completely understood. To address this question, Killian and his collaborators compared primary and metastatic cancers from the same patients to obtain a global snapshot of the methylome at different tumor stages. The group identified evidence that there is a remarkable stability in the epigenetic reprogramming that occurs in the primary cancer. The prognostic epigenomic determinants that arose close to the time of the cancer’s inception were seen again in recurrent and metastatic breast cancer samples.

Killian and his colleagues were also able to develop MDIs for non-epithelial constituents of cancer tissue. They found that lymphoid and mesenchymal indices were not substantially different between ER+ and ER- groups. This led them to conclude that these components could not explain the differential deviation from normal methylation patterns seen in these two malignant breast subtypes. However, they did play some role because a high mesenchymal index was associated with ER+ cancer survival, and a high lymphoid index was associated with medullary carcinoma. So epigenomic analysis of the mesenchymal background within ER+ breast carcinoma lesions may also have prognostic value as a biomarker for ER+ primary invasive breast carcinomas.

Killian and his team’s research shows that is possible to use routine breast pathology samples and evaluate methylation reprogramming (relative to baseline) for both epithelial and non-epithelial tissue constituents as a way to identify clinically and biologically relevant cancer subclasses.