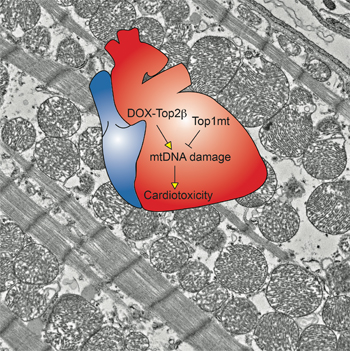 Doxorubicin (DOX) is an effective drug for treating cancers ranging from leukemia and lymphoma to solid tumors, such as breast cancer. DOX kills dividing cells in two ways: inserting between the base pairs of DNA and trapping a complex of DNA and an enzyme that cuts DNA, topoisomerase 2α, preventing DNA repair. However, DOX also causes congestive heart failure in about 30 percent of adult cancer patients and delayed onset heart failure in a significant number of pediatric cancer patients. The mechanism of this DOX-mediated cardiotoxicity is not well understood since heart muscle cells neither divide nor express Top2α, and there are currently no genetic factors that identify patients who are susceptible to cardiac damage from DOX. However, a recent study showed that mice lacking another topoisomerase, Top2β, did not experience cardiac damage after treatment with DOX.

Mitochondria are the only organelles, aside from the nucleus, that contain actively replicated and transcribed DNA, even in differentiated cells. Thus, mitochondrial DNA (mtDNA) may serve as a direct target of DOX in heart muscle cells. Top1mt is the only topoisomerase specific to this organelle, and Top1mt knockout (KO) mice are viable and display no obvious physical or behavioral defects.Yves Pommier, M.D., Ph.D., Chief of CCR’s Developmental Therapeutics Branch, along with colleagues from his branch, CCR’s Urologic Oncology Branch, the National Heart, Lung, and Blood Institute, and the Food and Drug Administration, reasoned that if DOX-mediated cardiotoxicity depends on mtDNA damage, Top1mt KO mice should be more sensitive to DOX because they lack the mtDNA maintenance activity of Top1mt.

To test this idea the researchers treated wild type (WT) and Top1mt KO mice with saline or DOX once a week for eight consecutive weeks and examined cardiac tissue from the mice one week later. Electron microscopy revealed no difference in mitochondrial structure between WT and KO mice treated with saline. After DOX treatment, however, mitochondria from Top1mt KO mice exhibited more damage, including swelling and fragmentation of the inner membrane (see Figure), which is essential for energy generation.

The investigators then studied isolated mitochondria from cardiac cells and showed that DOX treatment reduced the expression of complexes I, III, and IV of the respiratory chain more dramatically in the mitochondria from the KO mice. This effect was specific for heart muscle since they observed no difference in the expression of these proteins after DOX in either WT or Top1mt KO mouse skeletal muscle. Looking more closely at complex IV function, the scientists analyzed cytochrome C oxidase activity, which was reduced by 20 percent and 80 percent in DOX-treated mitochondria from WT and KO mice, respectively. Likewise, oxygen consumption and the mitochondrial membrane potential were significantly reduced in KO mouse mitochondria compared to WT mouse mitochondria after DOX treatment. DOX exposure also decreased mtDNA copy number and increased mtDNA damage more substantially in mitochondria lacking Top1mt.

To see whether these mitochondrial alterations corresponded with changes in heart muscle cells, the researchers examined sections of cardiac tissues stained with fluorescently labeled proteins to highlight cell membranes. Treatment with DOX induced hypertrophy, or cell swelling, in both WT and KO mice, but, similar to the effects in mitochondria, the KO cells were significantly larger. Additionally, these cells exhibited much larger nuclei. The investigators then assessed the tissue ultrastructure of the cardiac muscle from DOX- or saline-treated WT and KO mice. They observed prominent alterations in individual myofibrils in the KO mice after DOX (see Figure). Likewise, the distance between heart muscle cells was greater in the DOX-exposed Top1mt KO tissue. Since cardiac structure is essential to its function, these changes suggest significant defects in blood pumping ability in the KO mice.

Based on the mitochondrial and cardiac changes they found, the scientists asked whether loss of Top1mt affected survival following DOX treatment. After monitoring the mice for 90 days post last injection, they found that all of the mice treated with saline remained alive. In contrast, DOX treatment reduced the survival of both WT and KO mice but was more severe for the KOs. All seven KO mice had died by day 45, whereas four of seven WT mice were still alive at day 90.

Together these data demonstrate that mtDNA is a target of DOX and that Top1mt expression is necessary to maintain and repair mtDNA in the presence of DOX. The researchers found that Top1mt variants are present in the human population and suggest that testing for deleterious variants may identify patients who are particularly sensitive to DOX-induced cardiotoxicity.