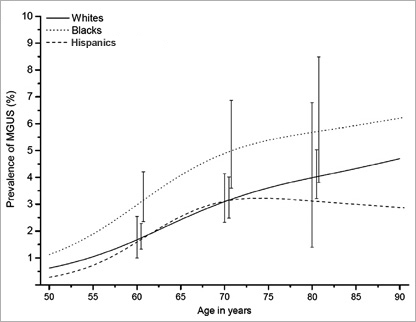 Although the prevalence of MGUS increased with age for all races, African Americans had consistently higher rates of prevalence, which suggest an earlier age of MGUS onset. Whites and Hispanics had similar prevalence rates of MGUS before the age of 70.

Multiple myeloma (MM) is a cancer of plasma cells, which are antibody-producing white blood cells. Patients with MM have a characteristic excess of monoclonal antibodies, so called M proteins, in their serum, urine, or both and plasma cell infiltration into their bone marrow at multiple sites. African Americans are more than twice as likely as whites to develop MM, but the reason for this higher prevalence is not entirely clear. Since MM is nearly always preceded by the premalignant condition monoclonal gammopathy of undetermined significance (MGUS), Ola Landgren, M.D., Ph.D., a Senior Investigator in CCR’s Lymphoid Malignancies Branch, and colleagues from NCI’s Division of Cancer Epidemiology and Genetics, the Mayo Clinic, and the Centers for Disease Control and Prevention (CDC), wanted to determine whether there were also disparities in MGUS prevalence or in biomarkers associated with a high risk of MGUS progression to MM.

To investigate these issues, the researchers used samples and data collected through the National Health and Nutritional Examination Survey (NHANES) III, performed between 1988 and 1994, and NHANES 1999-2004. Conducted by the CDC, the surveys consisted of in-home interviews and physical examinations, along with blood collection. Participants were selected to represent the civilian population of the U.S. but with higher sampling rates for older adults, African Americans, and Hispanics. Serum samples from 12,482 participants who were 50 years old or older (2,331African Americans, 2,475 Hispanics, 7,051 non-Hispanic whites, and 625 others) were available for M-protein analysis, which included agarose-gel electrophoresis, protein immunofixation, and serum-free light-chain assay. The investigators identified 365 participants with MGUS, an overall prevalence of 2.4 percent.

When the scientists looked at specific subgroups, they found that men had a higher overall prevalence of MGUS than women (2.8 percent versus 2.0 percent). Regression analysis revealed that MGUS prevalence increased with age for both sexes, though MGUS prevalence was consistently higher in men than in women after 60 years of age. The researchers also found that the adjusted prevalence rate of MGUS was higher in African Americans (3.7 percent) than in whites (2.3 percent) or Hispanics (1.8 percent). Their regression model showed that MGUS prevalence increased with age for all races but that African Americans had MGUS prevalence similar to whites or Hispanics a decade older, suggesting an earlier age of MGUS onset. Whites and Hispanics had similar prevalence rates until age 70 when rates appeared to level off for Hispanics but continued to increase for whites.

The investigators’ laboratory analyses indicated that more Hispanics had the IgA isotype of MGUS while fewer African Americans had the IgM isotype, which tends to progress to Waldenström macroglobulinemia rather than MM. The scientists also found that African Americans with MGUS had a higher median concentration of M protein, a known risk factor for progression. Thus, African Americans were more likely to have MGUS and disease characteristics that increase the probability of progressing to MM.

The researchers then compared their results with those that examined MGUS prevalence in the largely white residents of Olmsted County, Minnesota. Interestingly, the prevalence of MGUS in whites across the country was significantly less than that reported in the Olmstead County study, 2.3 percent versus 3.2 percent, respectively. To assess whether there might be regional differences in MGUS prevalence, the investigators used data from NHANES III, which provided location information. They found that the North and Midwest combined had a prevalence of 3.1 percent, similar to Olmstead County, while the South and West had a lower prevalence of 2.1 percent. Additional studies are needed to understand the causes of these geographic disparities.

Finally, the scientists used the NHANES data to look for associations between MGUS and a number of potential risk factors. They found a nonsignificant trend toward higher MGUS prevalence with increasing BMI but failed to find any associations with C-peptide, insulin, glucose, or C-reactive protein levels. The researchers also identified a nonsignificant association between increased MGUS prevalence and higher education and lower poverty income ratio, a proxy for socioeconomic status, for African Americans and Hispanics but not whites. In contrast to previous studies, they observed no association with immune-mediated conditions, such as rheumatoid arthritis.

In summary, the results provided by Landgren and colleagues support the idea that the higher MM risk of African Americans is due both to an increased prevalence of MGUS and to a higher likelihood of progressing from MGUS to MM. Their data also show that whites in the U.S. have a lower rate of MGUS than previously reported and that there are important geographic differences that warrant further investigation.