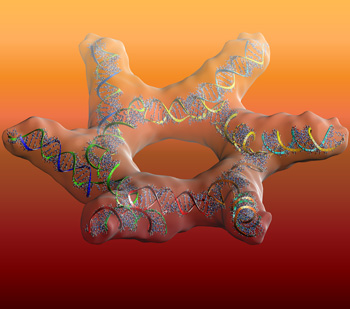 Recent advances in nanotechnology have generated excitement that nanomaterials may provide novel approaches for the diagnosis and treatment of deadly diseases, such as cancer. However, the use of synthetic materials to generate nanoparticles can present challenges with endotoxin content, sterility, or biocompatibility. Employing biological materials may overcome these issues with RNA being particularly attractive given the clinical applications of RNA interference and the abundance of functional RNAs, including aptamers and ribozymes. RNA can form stable three-dimensional nanoparticle structures that can be decorated with other nucleic acids, small molecules, or proteins, potentially increasing local concentrations of therapeutic agents and acting synergistically when combined.

Bruce Shapiro, Ph.D., Senior Investigator in CCR’s Basic Research Laboratory and his colleagues generated and characterized a number of functionalized RNA nanoparticles based on a RNA nanoring structure they designed. First, the researchers functionalized the nanoring with RNAs containing Dicer substrate sequences, so called DS RNAs, which are cleaved to allow the release of small interfering RNAs (siRNAs). When examined by cryo-electron microscopy, the DS-RNA-containing nanoparticles had a hexagonal structure that looked like a crown when viewed from the side and a pinwheel when viewed from the top. The investigators also modified the nanorings with RNA aptamers that bind malachite green dye, increasing its emission. The nanoparticles could be produced co-transcriptionally, allowing fluorescent tracking of their assembly in real time.

The scientists next studied the activities of the RNA scaffolds in cells. Using nanorings studded with fluorescently tagged DS RNAs or labeled individual DS RNAs, they observed greater transfection efficiencies in breast cancer cells with the nanorings than with the individual RNAs at a six-fold higher concentration, likely due to tighter binding of the nanorings to the transfection reagent. The researchers then assessed the release of the siRNA moieties by transfecting breast cancer cells that stably express green fluorescent protein (GFP) with anti-GFP DS RNA nanorings or six times the amount of individual DS RNAs. There was comparable GFP knockdown with both types of RNA after three days, and knockdown persisted over nine days. Even nanoring concentrations as low as one nanomolar caused significant silencing. Interestingly, the nanorings had a smaller effect on cell viability than transfection with the individual RNAs.

The investigators also assessed the ability to target the nanoparticles to cells using aptamers. They functionalized nanorings with up to five copies of J18, a RNA aptamer that binds the epidermal growth factor receptor (EGFR), and an oligonucleotide labeled with phycoerythrin via a protein linker. Nanorings with four or five copies of J18 showed the highest binding to EGFR-expressing A431 epidermoid carcinoma cells. This binding was mediated by aptamer association with the receptor since RNase treatment or the presence of recombinant epidermal growth factor blocked the interaction.

Up to this point, the modified nanorings were constructed by concatenating the various functional groups and the RNA nanoring monomers. Because RNAs above approximately 60 nucleotides cannot be chemically synthesized, the scientists decided to test the use of toeholds, consisting of a nucleotide sequence on the nanoring monomer and a complementary sequence on the functional group, which allows the two regions to anneal. This design would allow one scaffold to be used for multiple purposes and increase synthetic efficiency by shortening the requisite RNAs. The researchers generated nanorings linked to six anti-GFP DS RNAs by toeholds. They observed GFP knockdown when these nanorings were transfected into GFP-expressing breast cancer cells, demonstrating similar activity as the concatenated versions.

The investigators also asked whether it was possible to separate and activate multiple functionalities with these nanoparticle structures. They employed RNA-DNA hybrid nanorings and monomers with each structure containing half of a complementary DS RNA sequence and half a Förster resonance energy transfer (FRET) pair on the DNA. Each DNA strand in the monomers also contained a toehold sequence that would pair with the nanoring DNA strands. By introducing the complementary hybrid monomer to the hybrid nanorings, the scientists triggered formation of functional DS RNA nanorings and FRET induction on the DNA duplexes.

Finally, the investigators tested a potential clinical application of the functionalized nanorings. They generated two different nanoparticles, A and B, to target with DS RNAs six distinct regions of HIV-1: matrix, capsid, protease, reverse transcriptase, envelope, Nef, and Rev-Tat. Both A and B potently reduced HIV-1 protein expression in transfected HeLa cells, even at low concentrations, with minimal toxicity. Likewise, the nanoparticles inhibited HIV-1 production in the supernatant.

Together these results suggest the array of functional diversity possible from RNA-based nanoparticles. Given their low cellular toxicity, RNA nanorings may be a suitable structure on which to build clinically useful drugs, although much more research is still needed.