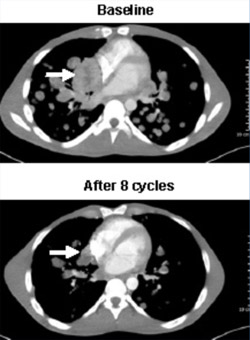 CT scan from 25 year-old patient with newly diagnosed metastatic ASPS; top scan is cross-section of the chest at the start of the trial and bottom scan is post-treatment, with significant tumor shrinkage.

Alveolar soft part sarcomas (ASPS) are highly vascular tumors that usually affect adolescents and young adults. Comprising less than one percent of soft tissue sarcomas, ASPS can be cured with surgery. However, its tendency to metastasize and its lack of response to standard soft tissue sarcoma chemotherapy regimens makes ASPS a particularly lethal cancer with a five-year survival rate of 20 percent in patients with metastatic disease who are not candidates for surgery.

Cediranib, a small molecule inhibitor of the three vascular endothelial growth factor receptors (VEGFRs), showed some activity against ASPS in two small, early phase clinical trials. Given the vascular nature of ASPS tumors and the promising preliminary studies with cediranib in patients with ASPS, researchers in CCR and the Division of Cancer Treatment and Diagnosis (DCTD),   Shivaani Kummar, M.D., Lee Helman, M.D., James Doroshow, M.D., and their colleagues, decided to test the efficacy of cediranib in a larger population of patients with metastatic ASPS.

The investigators enrolled 46 patients who were 18 years of age or older with metastatic ASPS. Most of the patients had been treated with prior surgery. Over half had also received radiation therapy or at least one systemic treatment, including antiangiogenic and MET inhibitor therapies.

The researchers treated the patients once a day with 30mg of oral cediranib either one hour before or two hours after eating. The cediranib dose could be reduced to 20 or 15mg per day if patients experienced certain toxicities. Treatment cycles lasted 28 days.

At the time of reporting, 43 patients were evaluable for assessment of objective response to cediranib. Two of the remaining patients had not completed two cycles of treatment, and one patient left the trial before receiving any treatment. Fifteen of the 43 evaluable patients, or 35 percent, experienced a partial response, which the researchers defined as a 30 percent or greater reduction in the sum of the longest tumor diameters. Importantly, one patient who experienced a partial response became eligible for surgery and shows no evidence of disease 16 months after resection of the tumor.

Twenty-six additional patients experienced disease stabilization. This led to a disease control rate, which is the sum of the patients with a partial response and with stable disease, of 84 percent at six months. Eleven patients continue to take cediranib.

Even patients who took prior systemic treatments derived a benefit from cediranib. All nine patients who previously received the antiangiogenic drug sunitinib experienced disease stabilization with cediranib. Of the three patients who had prior MET inhibitor therapy, two showed a partial response, and one had stable disease.

The side effects patients most frequently experienced were high blood pressure, diarrhea, increased liver enzymes, increased protein in the urine, reduced thyroid function, or pain at the tumor site. However, no patients experienced very severe side effects. Forty percent of the patients required a reduction in cediranib dose during later cycles because of side effects. Eight patients with tumors in their extremities or chest walls developed increased tumor pain with redness and tenderness during the second week of treatment, which lasted two to three days and required higher doses of pain medications during the episode.

To investigate the changes in gene expression in ASPS tumors caused by cediranib, the researchers collected tumor biopsies from eight patients before and three to five days after the start of treatment. Microarray analysis revealed that treatment with cediranib resulted in the downregulation of a number of genes related to vasculogenesis and angiogenesis, consistent with cediranib’s targeting of VEGFRs. At the same time, genes involved in inflammation were upregulated, which may explain the transient increase in tumor pain some patients experienced. Microarray data were confirmed with quantitative real-time PCR.