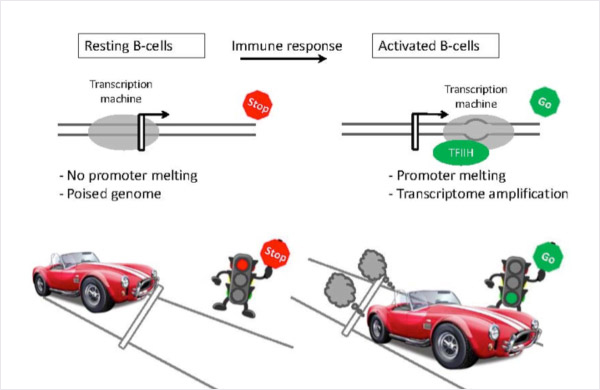 Unmelted promoters help to limit transcription in resting B cells (left), whereas in activated B cells promoters are melted and transcription has progressed further downstream to support higher levels of expression (right).

Transcription in eukaryotic cells is a precisely timed ballet that consists of RNA polymerase II (pol II) recruitment to gene promoters, assembly of the multiprotein preinitiation complex, opening of the DNA, escape of pol II from the promoter, pol II pausing downstream, mRNA elongation, and, eventually, termination. The two main points of regulation are thought to be polymerase recruitment and pause release, but most studies investigating these regulatory processes involved actively cycling cells.

Circulating B and T lymphocytes, however, are maintained in a quiescent state until they meet foreign antigens, which induce rapid gene expression accompanied by cell proliferation and differentiation. David Levens, M.D., Ph.D., working with Fedor Kouzine, Ph.D., and others in CCR’s Laboratory of Pathology set out to elucidate the mechanisms that control transcription in lymphocytes. These studies were performed in collaboration with Rafael Casellas, Ph.D., of the National Institute of Arthritis and Musculoskeletal and Skin Diseases and Teresa M. Przytycka, Ph.D., of the National Library of Medicine.

The researchers began by examining transcription in naïve mouse B cells activated with lipopolysaccharide and interleukin-4 (LPS+IL-4). LPS+IL-4 treatment induced chromatin relaxation, increased histone acetylation, and enhanced transcription by about 10-fold compared to resting B cells. To determine whether this increase was due to the transcription of a novel set of genes or to amplification of most genes, the investigators measured the number of mRNA transcripts in resting and activated cells. They found that expression of the majority of genes, rather than a specific subset, increased, supporting the transcriptome amplification model.

Consistent with this idea, the scientists observed increased histone acetylation at certain lysine residues across the genome. Acetylation increased proportionally with LPS+IL-4 treatment. In contrast, the amount of pol II recruited to promoters was essentially the same with or without activation, suggesting that enhanced gene expression in response to LPS+IL-4 is not regulated by pol II recruitment.

Next, the researchers examined the level of promoter pausing. In activated B cells, pol II tended to pause about 35 base pairs downstream from the transcription start site (TSS). In contrast, pol II in resting cells paused closer to the TSS, indicating that basal transcription in B cells corresponds with a delay that precedes pol II pausing. Since escape to the pause site follows open complex formation, the investigators asked whether the limited transcription in resting cells was due to reduced promoter DNA melting.

To evaluate the levels of DNA opening, the scientists generated a new technique to map sites of single-stranded DNA across the genome using high-throughput sequencing (ssDNA-Seq). The method uses potassium permanganate (KMnO4) to label exposed thymidine residues and prevent reannealing. Then labeled regions are digested with a nuclease, and the ends labeled with biotinylated nucleotides. After sonication, the smaller fragments are isolated using streptavidin and sequenced.

Using their new technique on samples from a human lymphoma cell line or activated mouse B cells, the investigators found most regions of ssDNA within genes and with peaks at TSSs and areas of pol II binding. The amount of ssDNA also correlated with the level of gene expression. Thus, ssDNA-Seq accurately reflects DNA melting associated with gene expression.

The researchers then used ssDNA-Seq to examine promoter melting in resting and activated B cells. They found that the distribution of ssDNA within and between genes was similar between the cell types. However, the scientists observed almost no melted DNA at promoters in resting cells even though pol II recruitment was comparable in resting and activated cells. These results suggest that under basal conditions pol II complexes are in closed confirmations and activation promotes complex opening and gene expression.

Stable opening of DNA during transcription requires TFIIH, an 11-subunit complex that includes the XPD helicase. The investigators found low levels of TFIIH subunits in resting B cells, but with activation, they saw a dramatic increase in TFIIH subunit transcript and protein production. However, the researchers observed no change in the amounts of pol II or another transcription factor TFIID, suggesting that limited amounts of TFIIH may keep gene expression low in resting B cells.

The researchers then examined fibroblasts from patients with trichothiodystrophy (TTD), who have reduced TFIIH expression due to subunit mutations that lead to UV-sensitivity, mild mental retardation, skin disorders, and recurrent infections. Reduced transcription is thought to contribute to disease severity, but the mechanism is not clear. Using cells with a temperature dependent XPD mutation, the investigators analyzed regions of ssDNA. At higher temperatures, they observed reduced mRNA synthesis and defects in proliferation both of which correlated with reduced opening of promoter DNA.

Together, these results show that promoter melting across the genome is a critical step in regulating lymphocyte gene expression and is tied to TFIIH levels. They also provide a mechanism for the reduced transcription and, possibly, the immunodeficiency experienced by patients with TTD.