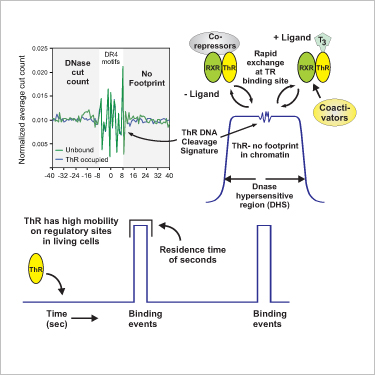 Thyroid hormone receptor binds to response elements and recruits co-repressors in the absence of ligand. Activation with hormone induces replacement of co-repressors with co-activators. Both of these binding modes, however, are highly dynamic. Fluorescence Recovery After Photobleaching (FRAP) experiments indicate the receptor has a short residence time on chromatin in living cells. Thus, the receptor leaves no significant footprint in chromatin at the hypersensitive sites where it binds. There is a short "cleavage signature" directly at the binding site that is present both in the presence and absence of receptor binding. This signature results from primary structure of the DNA molecule.

Thyroid hormone (TH) is one of the primary endocrine regulators of human metabolism and homeostasis. Acting through three forms of the thyroid hormone receptor (THR; alpha-1, beta-1, and beta-2), TH regulates target gene expression in nearly every cell in the body, modulating fundamental processes, such as basal metabolic rate, long bone growth, and neural maturation. TH is also essential for proper development and differentiation of all cells of the human body.

For over two decades, a mechanism termed the “bimodal switch” generally has been accepted as the model for THR action. In this model THRs not bound to TH associate with their DNA recognition elements and repress adjacent target genes by forming stable complexes with repressive cofactors, including NCOR and SMRT. These complexes, in turn, attract other silencing factors (HDACs, Sin3A, etc.) to create a repressed chromatin environment. Upon activation by TH, the bound factors are displaced, new activating cofactors are recruited, and transcription of target genes is induced. A central feature of this model is long-term, stable binding of the receptor, which serves as a scaffold for the activating and repressing cofactors.

Two CCR research groups, one headed by Sheue-yann Cheng, Ph.D., of the Laboratory of Molecular Biology, and a second directed by Gordon Hager, Ph.D., of the Laboratory of Receptor Biology and Gene Expression, with assistance from Paul Meltzer, M.D., Ph.D., of CCR’s Laboratory of Cancer Genetics, teamed up to revisit this long-standing view of THR action using the mouse liver as a model system. Their results called into question two central aspects of the bimodal switch model. First, combining genome-wide chromatin immunoprecipitation and sequencing (ChIP-seq) to monitor THR binding and DNase I hypersensitive site sequencing (DNase-seq) to monitor open and closed chromatin states, the researchers observed many novel DNA binding events in the presence of TH. That is, rather than existing as a stable, chromatin-bound, repressive factor, THR bound to TH response elements (TREs) in a ligand-dependent fashion. Furthermore, the receptor often created localized “open chromatin” structures at the binding sites. The second contradictory observation emerged from studies to detect DNA sites protected from nucleases, a so-called protein footprint, which is expected for a statically bound receptor. None of the THR binding sites, either activating or repressing, showed any evidence of a corresponding footprint. These findings are consistent with photobleaching experiments performed several years ago that argued that the THR moves quickly on and off chromatin.

Although no footprints were observed, the THR binding sites were universally marked by specific cleavage signatures that correspond precisely to the THR DNA binding motifs. As for other highly mobile transcription factors, these features were present in the DNA irrespective of THR binding. These nuclease cleavage patterns result not from protein protection but rather from the DNA structure itself, and, in fact, represent the chemical structure that the receptor recognizes.

The combined results from the new study support an altered view of THR function. In this model the receptor exchanges rapidly and continuously with TREs in chromatin. In the absence of ligand, the receptor recruits corepressors to binding elements, but these complexes are not statically bound to chromatin. The rapidly moving receptor is not present on the template long enough to produce a significant footprint. Upon activation by TH, the THR recruits coactivators rather than corepressors, inducing target genes, but the mode of action remains highly dynamic, with THR exchanging rapidly with binding elements. This is similar to results for steroid hormone receptors.

The findings reported by Cheng, Hager, and colleagues represent a major advance in our understanding of THR action. The action of THR now appears more aligned with well-developed models for steroid receptor action. The nuclear receptors, as a class, appear to behave as highly mobile factors with the ability to initiate the chromatin transitions necessary for cofactor recruitment and enhancer action. This mode of action has recently been termed “dynamic assisted loading.” This new model of TH action represents a significant step toward a better understanding of mechanisms of gene regulation by this important hormone.