The Ups and Downs of Glucocorticoid Signaling 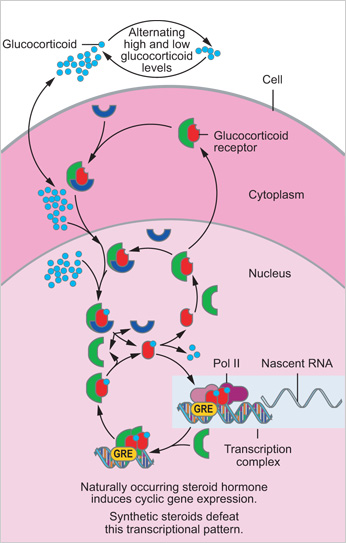 Ultradian (cyclical) release of steroid hormones induces a cycle of gene expression called gene pulsing. When natural or synthetic hormones were added to human cells, there was an increase in both the quantity of receptor associated with DNA and in the high levels of gene expression. In contrast, only when the synthetic steroid was used, steroid-receptor complexes remained bound to DNA and expression of target genes continued even after the hormone was removed.

Glucocorticoids are steroids that react to stress by regulating inflammation and controlling metabolism. Because of their anti-inflammatory and immunosuppressive properties, corticosteroids are among the most frequently prescribed drugs. Glucocorticoids are often used to treat arthritis and autoimmune diseases and are also given in combination with other drugs to treat cancers—such as leukemias and lymphomas—or to alleviate side effects from chemotherapy and radiation. In humans, a glucocorticoid called cortisol is released from the adrenal gland approximately every hour to send signals to cells throughout the body. This pulsed release of hormone is called ultradian secretion.

When cortisol enters a cell, it binds to a protein called the glucocorticoid receptor. Upon binding, cortisol changes the receptor so that it translocates to the nucleus and interacts with DNA, leading to the expression of certain genes. Expression profiles in response to glucocorticoids has previously been studied using long-term stimulation with synthetic hormones ,despite the fact that this method poorly mimics the ultradian secretion of hormones that actually occurs.

Diana Stavreva, Ph.D., a Research Fellow working with Gordon Hager in the Laboratory of Receptor Biology and Gene Expression, conducted studies in cultured cells and live animal models to examine the effects of ultradian glucocorticoid release on gene expression. Dr. Stavreva found that the pulsed release of steroid induces a cycle of gene expression called gene pulsing. A report of these findings was recently published in Nature Cell Biology.

The researchers used cell cultures to observe the association of the glucocorticoid receptor with DNA and the resulting expression of specific gene products. They then stimulated cells with either the naturally occurring glucocorticoid (corticosterone in rats; cortisol in humans) or a synthetic glucocorticoid called dexamethasone. There was an increase in both the quantity of receptor associated with DNA and gene expression when corticosterone levels were high, and both outcomes decreased rapidly as the steroid was removed. In contrast, measurements taken after treatment with dexamethasone showed that the steroid-receptor complex remained bound to DNA and expression of target genes continued even after the steroid was removed. Consequently, dexamethasone administration resulted in a much higher level of gene expression.

These same effects were also detected in live rats that were treated with pulses of a glucocorticoid. The researchers measured an increase in the amount of glucocorticoid receptor bound to DNA during the pulse, which then returned to original levels within an hour. The amount of gene expression in the liver also rose as the level of steroid increased and dropped back to original levels as the steroid quantity diminished.