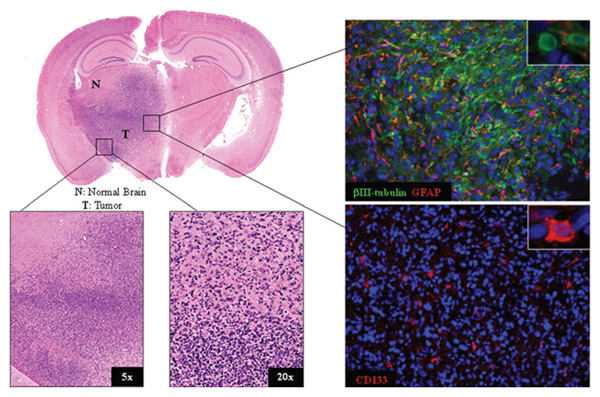 Brain tumor cells from an intracranial xenograft were analyzed by histochemistry. Presence of markers GFAP and b-III tubulin indicate that the tumor cells have differentiated, at least partially, along astrocytic and neuronal pathways, respectively; and the presence of marker CD133 suggests the continued presence of tumor stem-like cells.

Glioblastoma (GBM) is the most common and most aggressive form of brain cancer. The primary treatment for GBM is radiation therapy. Unfortunately, while some patients initially respond, the vast majority of GBM patients fail radiotherapy, and the tumor usually grows back within two years. To gain a better understanding of the biological basis for GBM resistance to radiation, researchers initially studied GBM cell lines in vitro. In recent years, the focus has been on so-called tumor stem-like cells (TSCs), which are thought to be responsible for driving and maintaining tumor growth. To the researchers’ surprise, TSCs grown in vitro did not have the same ability to resist radiation as TSCs in the GBM tumors.

This led Kevin Camphausen, M.D., of the CCR Radiation Oncology Branch, together with Philip Tofilon, Ph.D., and their colleagues from Moffitt Cancer Center, to reason that something absent from in vitro conditions, namely, the tissue surrounding the brain tumor—the tumor microenvironment—contributes to GBM’s radioresistance. To explore the role of the microenvironment, they compared the radiosensitivity of human GBM TCSs grown in vitro to that of human GBM TSCs implanted in mouse brains. Their results were recently published in Clinical Cancer Research.

Radiation causes breaks in both strands of the DNA chain (double-strand breaks, DSBs). Cells respond to the damage by recruiting DNA repair proteins to the breaks. For example, DSBs trigger formation of clusters of γH2AX and 53BP1 proteins in the cell nucleus. These two kinds of clusters can be spotted by confocal microscopy, so it is possible to measure an individual cell’s radiosensitivity both in vivo and in vitro. When the clusters of γH2AX and 53BP1 disperse, this indicates that DNA repair occurred.

The researchers found that following radiation, there were fewer γH2AX and 53BP1 clusters in the cells implanted in the mouse brains compared with cells grown in vitro. In addition, it took about 1 hour for the γH2AX clusters to disperse in the brain, as compared with 24 hours in vitro, suggesting that repair of radiation-induced DSBs was faster in the brain. As observed with γH2AX clusters, the 53BP1 clusters also dispersed more slowly in vitro than in vivo.