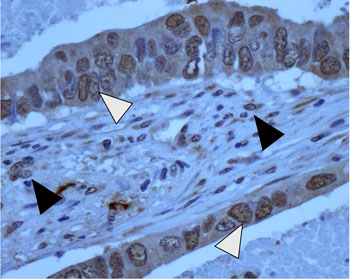 Staining of a lung adenocarcinoma tissue with anti-Brachyury monoclonal antibody demonstrating intense expression of Brachyury protein in the epithelial tumor compartment (indicated with white arrowheads) as well as in single disseminated cells within the adjacent stroma (indicated with black arrowheads).

Claudia M. Palena, Ph.D., an Investigator in CCR’s Laboratory of Tumor Immunology and Biology, collaborated with CCR colleagues and Italian scientists in studying Brachyury protein expression in human lung tumor tissues and carcinoma cell lines. Brachyury protein is a factor in epithelial-mesenchymal transition (EMT). EMT is a process in which a tumor cell loses epithelial traits—primarily the expression of proteins that make it adhere to other tumor cells—and gains mesenchymal traits—chiefly the expression of proteins that give it motility, allow it to detach from the primary tumor, and initiate a series of events that lead to metastasis.

The scientists compared the expression of Brachyury protein in tissue samples of 39 lung cancer patients to normal tissue collected from individuals who do not have cancer. The scientists demonstrated that Brachyury protein was expressed in 41 percent of the primary lung carcinomas they analyzed, including adenocarcinoma and squamous cell carcinoma.  Adenocarcinoma and squamous cell carcinoma together make up approximately 80 percent of non-small cell lung cancer diagnoses. Expression of Brachyury was detected predominantly in samples from patients with advanced disease (stages II-IV). In some of the lung cancer patients, the scientists also detected Brachyury protein in tissues adjacent (but not distal) to the primary tumor site, an indication of the protein’s role in EMT and metastasis. Brachyury protein was not expressed in most normal tissues.

Epidermal growth factor receptor (EGFR) protein, which plays a role in activating cell growth and cell division, is present in approximately 60 percent of lung cancers. EGFR kinase inhibitors, designed to block EGFR and shrink tumors, is a common treatment, but many patients develop resistance to this therapy. In investigating the action of an EGFR inhibitor on cells with Brachyury protein, the scientists found that the presence of Brachyury protein enhanced the cells’ ability to withstand treatment, i.e., Brachyury protein corresponded to greater drug resistance.

The scientists say their findings support additional research into the development of new Brachyury-targeted therapies that would prevent metastasis and drug resistance. A clinical trial is now ongoing at the NIH Clinical Center employing a recombinant vaccine directed against Brachyury. In the United States, lung cancer is the primary cause of cancer-related death. The overall five-year survival rate is less than 16 percent, and approximately 50 percent of patients experience recurrence of cancer within five years of diagnosis.