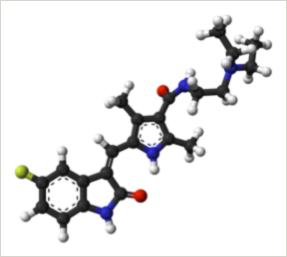 Model of a sunitinib molecule

Many researchers and clinicians consider targeted therapies, such as tyrosine kinase inhibitors and antibody-based drugs, to be a great advance in the treatment of patients with cancer. Unlike older chemotherapy drugs, targeted therapies are designed to direct drugs specifically to cancer cells or to interfere with pathways essential to tumor growth with less toxicity to normal cells. Recent studies in animal models, however, have suggested that sunitinib, which inhibits the activity of several receptor tyrosine kinases including one critical for tumor blood vessel formation, may actually accelerate tumor growth after treatment stops.

To investigate whether data from human trials show a similar trend, Tito Fojo, M.D., Ph.D., in CCR’s Medical Oncology Branch and Affiliates and his colleagues including physicist Krastan Blagoev, Ph.D., of the National Science Foundation, examined the results of the phase III clinical trial that led to the Food and Drug Administration’s approval of sunitinib for metastatic renal cell carcinoma (mRCC), a type of kidney cancer. In the trial, 750 patients with mRCC who had not been treated previously were randomly assigned to sunitinib or to interferon-alpha (IFNa), a standard therapy at the time the trial was conducted.

The researchers found that patients who received IFNa had a longer median time from the end of treatment to their death, referred to as the post-protocol survival time, than patients who received sunitinib. At first glance, this result might suggest that sunitinib treatment does accelerate tumor growth after its discontinuation. But the investigators pointed out several confounding factors, such as the treatments patients received after their randomly assigned therapies and the possibility that IFNa induced an immune response against a patient’s tumor, which prevented a direct comparison of post-protocol survival times between the two groups. The researchers also noted that patients who received sunitinib stayed on therapy and survived longer overall than those assigned to IFNa.

Because this was a large trial, the researchers could look within the subgroup of patients who took sunitinib for additional insight into its harms after discontinuation. They found no correlation between the length of time that a patient received sunitinib and his or her post-protocol survival time. The data showed, however, that overall survival time tended to increase the longer a patient took sunitinib, indicating that patients who received the drug longer did not experience greater harm.

The researchers then assessed the relationship between a patient’s response to sunitinib and the outcome of treatment. If sunitinib was harmful, those with a greater tumor response would be expected to have worse outcomes. They first used tumor shrinkage, measured as a ratio of a patient’s minimum tumor size to initial tumor size, as an indicator of tumor response. Patients whose tumors shrank more tended to take sunitinib longer and to have longer overall survival times, suggesting that sunitinib was, in fact, beneficial. Post-protocol survival, on the other hand, did not correlate with tumor shrinkage.

As a second measure of response the researchers calculated the tumor growth rate constants from data collected while patients received sunitinib and compared them to treatment outcomes. This analysis exploited a novel assessment methodology developed in collaboration with Wilfred Stein, Ph.D., of the Hebrew University and who is working at CCR. Again, they saw that lower tumor growth rates, or increased tumor sensitivity to sunitinib, correlated with longer treatment and overall survival times, and indicated that a greater sunitinib effect was not harmful but was beneficial.

Together these data show that sunitinib treatment improves the overall survival of patients with mRCC and that increased exposure to sunitinib does not accelerate the growth of established metastases after treatment ends. Whether sunitinib has the same effect on very small tumors, such as those in patients with non-metastatic RCC who are treated with surgery, which may be more similar to tumors in animal models, will require additional human studies.