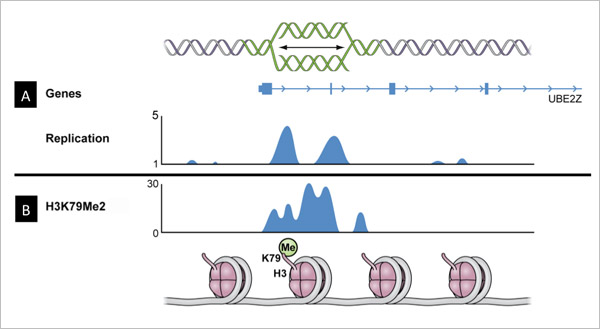 Before cells are able to divide, they must first duplicate their chromosomes accurately. DNA replication and packaging of DNA into chromosomes by histone proteins need to be coordinated by the cell to ensure proper transmission of genetic and epigenetic information to the next generation. Mammalian DNA replication begins at specific chromosomal sites, called replication origins, which are located throughout the genome. The replication origins are tightly regulated to start replication only once per cell division so that genomic stability is maintained and cancer development is prevented.

In a previous study, the research group had mapped locations of replication initiation events genome-wide in several human cell lines and found that the events tend to be depleted at transcription start sites and enriched just downstream of those sites. In the current study, the researchers investigated whether a particular chromatin modification—dimethylation of histone H3 lysine K79 (H3K79Me2)—might mark these replication initiation events. An analysis of H3K79Me2 in human leukemia cells, performed in collaboration with Keji Zhao, Ph.D. at NHLBI, indicated that chromatin regions having H3K79 dimethylation showed high enrichment for replication initiation sites. The extent of this enrichment in regions having methylation of histone H3 on lysine 79 was markedly higher than in regions having other histone modifications.

To characterize the association between H3K79 dimethylation and replication initiation, the researchers measured H3K79Me2 levels during G1, S, and G2 phases of the cell cycle in human leukemia cells. The overall level of H3K79Me2 modification did not change during the cell cycle and the number and distribution of chromatin regions having H3K79Me2 was similar in the G1 and G2 phases; however, the distribution of H3K79Me2 associated regions did expand in S-phase. This suggests that the H3K79Me2 modification associates preferentially in a cell cycle specific manner with replication initiation regions.

The next step for the researchers was to determine if H3K79 was methylated at a replicator sequence needed for initiation of DNA replication. Following chromatin immunoprecipitation analyses, they found that H3K79 was dimethylated in a region containing a functional replicator (a DNA sequence capable of initiating DNA replication), but the methylation was not present in a mutant replicator that could not initiate replication.

To determine whether H3K79 dimethylation plays a role in regulating the initiation of DNA replication, the researchers depleted DOT1L, the enzyme that methylates histone H3 on lysine K79. Depletion of DOT1L in human colon cancer cells prevented H3K79 dimethylation, but did not affect the frequency of replication initiation events. The next step was to determine whether cell populations in which DOT1L was depleted exhibited changes in cell cycle patterns. The overall distribution of cells in the G1, S, and G2/M phases of the cell cycle was similar in control and DOT1L depleted cells, but flow cytometry analyses indicated that DOT1L depleted cells had fewer cells in the early S-phase and more cells with late-S-phase DNA content than cells in which DOT1L was not depleted. In agreement, the researchers observed a population of DOT1L depleted cells that contained more DNA than expected in cells that have fully duplicated their genomes, indicating that in such cells, some regions of the genome had replicated more than once without cell division. These results suggested that although most cells can continue to proliferate and replicate DNA without dimethylated H3K79, blocking H3K79 dimethylation might affect regulatory processes that control the order and timing of DNA replication and prevent excess DNA replication.

This study demonstrates for the first time that H3K79 dimethylation is associated with initiation of DNA replication genome wide, that the modification of H3K79 correlates with replicator activity, and that H3K79 methylation plays a role in ensuring that replication initiates only once per cell cycle, thus preventing genomic instability.