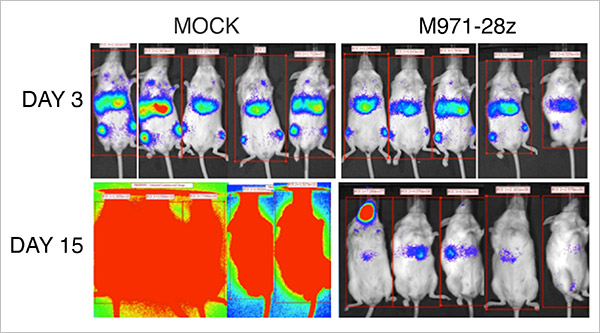 There are about 4,000 new cases of acute lymphoblastic leukemia (ALL) in the United States each year. Great improvements have been made in the treatment of ALL, but many patients suffer from side effects of standard therapy and continue to die of this disease. One of the most promising therapeutic strategies includes engineering T cells with a chimeric antigen receptor (CAR) that alters T cell specificity and function to recognize tumor antigens.

Previous clinical studies have shown that CARs targeting CD19 and CD20 molecules in B-cell malignancies such as ALL is a promising new approach, but determining key factors that influence CAR efficacy requires further investigation. Rimas Orentas, Ph.D., and his colleagues in CCR’s Pediatric Oncology Branch set out to design CARs that target CD22, another molecule found on human B cell diseases, and determine what makes a CAR most efficient.

The typical CAR design includes a single-chain variable fragment (scFv) derived from a monoclonal antibody along with a signaling motif from the T cell receptor zeta chain. This design is referred to as first-generation CAR. Adding one (second-generation CAR) or two (third-generation CAR) costimulatory activating motifs from CD28 and 4-1BB to CARs increases their antitumor activity and their longevity in vivo. The researchers used the CD22 scFV to design a series of CAR constructs to determine which design was most effective against leukemia. Each of the constructs had one of three binding domains that target CD22 (BL22, HA22, and m971) fused to transmembrane and signaling sequences derived from the TCR zeta chain, CD28, and 4-1BB. In some of the constructs, the team positioned the binding domain farther from the T cell membrane using an IgG heavy chain constant domain (CH2CH3). Activated T cells were then transduced with the CAR constructs using retroviral gene vectors.

Before testing the CARs, the researchers first investigated CD22 expression on B-cell precursor ALL (BCP-ALL) cell lines and blasts from patients with BCP-ALL. CD22 was found on all of the cell lines and on more than 90 percent of blasts in almost all patients evaluated. Efficacy of the CARs was then tested on the CD22+ BCP-ALL cell lines and blasts. They found that constructs containing the m971 binding domain were better at killing CD22+ leukemia cells than constructs with the BL22 and HA22 binding domains. The team incorporated the antigen binding domains of BL22 and HA22 into their CAR design because earlier studies showed that both have antitumor activity in BCP-ALL. m971 binds a more membrane proximal epitope on CD22 than the other domains, so the researchers concluded that epitope specificity had a major impact on CAR efficacy. The researchers also found that adding the CH2CH3 domain to some of the CARs did not have an impact on potency.

The researchers tested the two best second-generation CD22-CARs in mice with leukemia. They found that treatment with the CD22-CARs increased survival significantly. In particular, the CAR expressing the m971 domain was the most effective. Also, whether the second-generation expressed CD28 or 4-1BB did not affect the CARs’ ability to target BCP-ALL.

These findings indicate that CD22 is a promising target for treatment of BCP-ALL and that second generation m971 derived anti-CD22-CARs is a potential therapeutic for patients with this disease. In order to design the most potent CAR, target antigen selection, CAR binding affinity, and incorporation of appropriate signaling and activation domains should be taken into consideration.