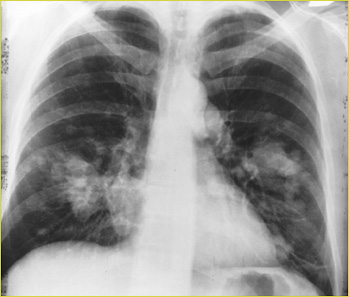 CCR researchers found a statistically significant association between a genetic variant in the promoter region of the MBL2 gene and improved likelihood of lung cancer survival among white patients who were once heavy smokers.

CCR investigators have discovered evidence that links lung cancer survival with genetic variations (called single nucleotide polymorphisms) in the MBL2 gene, a key player in innate immunity. The variations in the gene, which codes for a protein called the mannose-binding lectin, occur in its promoter region, where the RNA polymerase molecule binds to start transcription, and in the first exon that is responsible for the correct structure of MBL. The findings appear in the September 19, 2007, issue of the Journal of the National Cancer Institute.

Curtis C. Harris, M.D., Chief of CCR's Laboratory of Human Carcinogenesis, and first author Sharon Pine, Ph.D., of the same lab, investigated the relationship between five variants of MBL2 and survival among 558 white and 173 African American patients with lung cancer. They found a statistically significant association between a variant in the promoter region of MBL2 and improved likelihood of lung cancer survival among white patients but not African American patients. The survival association among white patients was strongest in heavy smokers and independent of disease stage.

The variation that increases survival in white lung cancer patients also produces a decreased innate immune response. Since variations in the genes involved in the innate immune response also modulate inflammation, levels of inflammation may be prognostic markers for lung cancer survival. Although the smaller sample size of African American patients reduced the study's power to conclude any survival associations in this racial group, these preliminary results point to the need for health disparities research to better examine race-based variations in the biology of cancer.