Surprising Loss of Symmetry of Magnesium Channel CorA Upon Gating 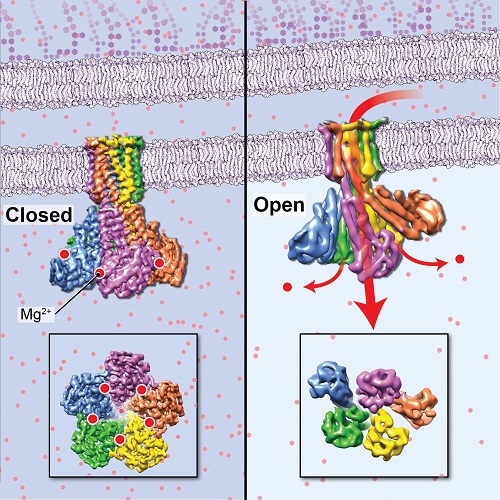 Magnesium ions (Mg2+) play essential roles in all living organisms. Bacteria and other prokaryotes rely upon the Mg2+-dependent channel CorA, which is composed of five identical subunits (A-E), to obtain these ions from their surroundings. Studies of CorA showed that, in contrast to most ligand-gated ion channels, binding of Mg2+ leads to channel closure while loss of Mg2+ promotes its opening, suggesting CorA has a unique mechanism of action. Unexpectedly, crystal structures of CorA showed no significant differences in subunit conformation in the presence and absence of Mg2+. Electron paramagnetic resonance spectroscopy of labeled CorA in a lipid environment, however, demonstrated large subunit rearrangements with Mg2+ binding and loss. To address these conflicting results, a team of scientists that included Sriram Subramaniam, Ph.D., of CCR’s Laboratory of Cell Biology, Doreen Matthies, Ph.D., a postdoctoral fellow in Sriram Subramaniam's laboratory, their collaborator Eduardo Perozo, Ph.D. at the University of Chicago, and their colleagues at NCI and Chicago, used a combination of single-particle cryo-electron microscopy (cryo-EM) and biochemical analyses to determine the three dimensional structures of Mg2+-bound and -free CorA without the necessity of a restrictive crystal lattice.

The researchers first established the Mg2+-bound cryo-EM structure of CorA to a resolution of approximately 3.8 angstroms. At 200 kDa, CorA is one of the smallest proteins whose structure has been determined at near-atomic resolution using single particle cryo-EM methods. This structure supported the previously described five-fold symmetry of the closed channel and provided sufficient resolution to trace each complete polypeptide chain and the location of bound Mg2+. The investigators showed that this cryo-EM structure of CorA is similar to the reported X-ray crystal structure with minor differences localized to more dynamic protein segments, the transmembrane domain, and residues involved in crystal contacts.

The scientists then examined the structure of CorA in the absence of Mg2+, and found dramatic differences. They identified at least two distinct conformations (referred to as states I and II) to resolutions of approximately 7.1 angstroms each with loss of symmetry and major rearrangements in the cytoplasmic domains. Subunit A showed an outward movement of around 23 angstroms while adjacent subunit B moved inward approximately 21 angstroms. The researchers observed smaller reorientations of subunits C and D, which were larger in state II than state I, and almost no change in subunit E. Surprisingly, the transmembrane domains exhibited only subtle changes and retained an approximate five-fold symmetry.

To determine whether the asymmetric open conformation is physiologically relevant, the investigators reconstituted CorA in lipid-nanodiscs and demonstrated a similar break in symmetry with Mg2+ removal. The scientists then carried out cross-linking experiments to further validate the conformational change under physiological conditions. In the absence of Mg2+, they observed reduced crosslinking between cytoplasmic domains, indicating significant movement of these regions. Additionally, spin-labeled CorA distance determinations using molecular dynamics simulations supported the physiological relevance of the asymmetric Mg2+-dependent gating of CorA.

Based on these results, the researchers proposed a mechanism for CorA gating in which Mg2+ binding stabilizes the five subunits symmetrically. Release of Mg2+ due to decreased intracellular Mg2+ concentrations destabilizes one of the subunits, which then destabilizes an adjacent subunit, leading to increased flexibility and allowing for large conformational changes. This increased flexibility likely enables Mg2+ translocation. These results highlight the value of using cryo-EM to study the structure and function of ion channels, many of which are implicated in cancer.