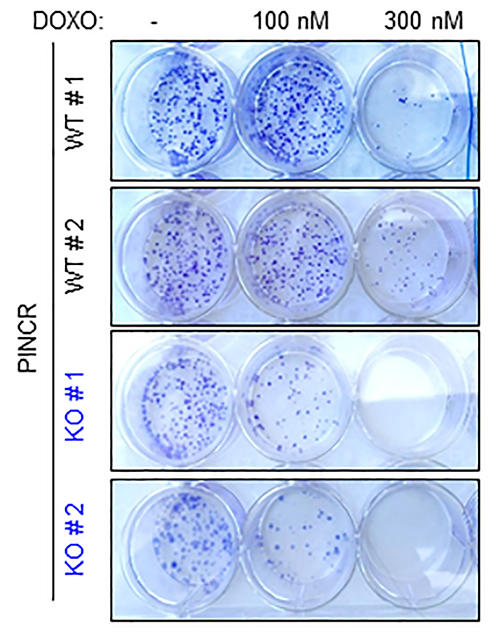 This photo shows colon cancer cells with intact PINCR (WT) and colon cancer cells in which PINCR had been deleted, or “knocked out” (KO). Some cells were left untreated, while others were treated with different concentrations of the DNA damaging agent Doxorubicin. More of the cells with intact PINCR survived the DNA damage than did the knockout cells, suggesting PINCR’s role in promoting cell survival.

Now, for the first time, CCR investigators have characterized a lncRNA called p53-induced noncoding RNA (PINCR). In a paper published June 5, 2017, in eLife, they describe how PINCR responds to DNA damage in cells by regulating genes that promote cell survival. The findings suggest an important role of lncRNAs in response to DNA damage, especially in cancer, and point to them as potential targets for cancer treatment.

When a cell suffers DNA damage, a protein known as p53 prevents the cell from dividing and potentially leading to cancer by activating either pro-survival genes or pro-death genes. Pro-survival genes temporarily halt the cell’s growth, keeping it alive and allowing it time to repair its DNA. Pro-death genes destroy the cell if the DNA damage is too severe.

To figure out how p53 decides which class of genes to activate and what role lncRNAs play, researchers led by Ashish Lal, Ph.D., Investigator in the Genetics Branch, treated human colon cancer cells with a DNA-damaging agent to activate p53. This increased the levels of PINCR by a hundredfold. The researchers then used a DNA-damaging agent to treat colon cancer cells that had an intact PINCR gene, as well as colon cancer cells in which they had deleted, or “knocked out,” the PINCR gene. These knockout cells had an impaired ability to halt their growth and stay alive, suggesting that p53 requires PINCR to activate pro-survival genes.

To determine how PINCR helps p53 activate pro-survival genes, Lal’s team used a novel technique to pull down PINCR from colon cancer cells and identify the molecules bound to it. They showed that PINCR binds to the protein Matrin 3. Matrin 3, in turn, binds to p53 and guides it toward specific stretches of DNA crucial for p53 to initiate and enhance the activation of pro-survival genes. These findings mark the first to describe PINCR’s function in cells with DNA damage and the mechanism behind it. They show that lncRNAs can have important functions in cells, including in pathways involved in cancer, suggesting areas for further research in the development of cancer treatments.