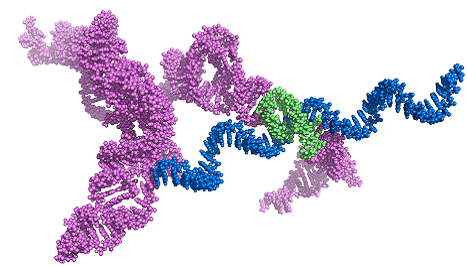 Scientists from CCR have generated a comprehensive structural map of Kaposi sarcoma-associated herpesvirus polyadenylated nuclear (PAN) RNA, a long non-coding RNA that helps the virus evade detection by its host’s immune system. Their study reveals, for each of three biological  contexts, unique structural elements of the RNA and their interactions with protein partners. The findings open new oppportunites to study the life cycle of this cancer-causing virus.

In people with weakened immune systems, infection with KSHV can cause cells to lose their growth controls and develop into a rare cancer called Kaposi sarcoma. During lytic infection, in which the virus multiplies and destroys its host cell, KSHV produces an abundance of PAN RNA, which suppresses the expression of cellular immune response genes.

To gain a clearer picture of how PAN RNA’s structure dictates its function, Joanna Sztuba-Solinska, Ph.D., a research fellow in the laboratory of Senior Investigator Stuart Le Grice, Ph.D., used a new method called SHAPE-MaP to reveal the structure of PAN RNA and map its protein-binding sites with single-nucleotide precision. Collaborating with Jason Rausch in Le Grice’s lab and members of Denise Whitby’s lab at NCI-Frederick, she revealed subtle differences in PAN’s structure and binding sites depending on whether the RNA was inside the cell’s nucleus, in the cytoplasm or packed into viral particles. In subsequent experiments, the researchers matched specific cellular and viral proteins to binding sites on the RNA molecule.

The new study, published April 5, 2017, in the journal Nucleic Acids Research, is the most extensive structural characterization to date of a viral long non-coding RNA in discrete biological contexts. It provides a broad framework for investigating how PAN RNA persists inside cells and influences the expression of viral and host genes.