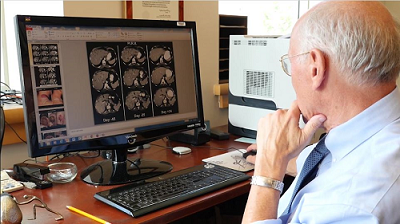 Dr. Steven Rosenberg in his office.

Steven Rosenberg M.D., Ph.D., Chief of CCR’s Surgery Branch, has been awarded the 2016 Novartis Prize for Clinical Immunology.  Rosenberg received the award with scientific colleagues, Zelig Eshhar and Carl June, for  their groundbreaking work  in cellular immune therapy and the  successful application of Chimeric Antigen Receptor (CAR)-T cells in cancer immunotherapy.   The Novartis Prizes for Immunology are awarded every three years for breakthrough contributions to the fields of basic and clinical immunology.

When Dr. Rosenberg began his career, the anti-cancer armamentarium included three weapons—surgery, radiation and chemotherapy. He has pioneered the development of a fourth—immunotherapy. His work has resulted in the first effective immunotherapies for selected patients with advanced cancer.  His studies of cell transfer immunotherapy have resulted in durable complete remissions in patients with metastatic melanoma. He has pioneered the development of gene therapy and was the first to successfully insert foreign genes into humans. His studies of the adoptive transfer of genetically modified lymphocytes resulted in the regression of metastatic cancer in patients with melanoma, sarcomas and lymphomas.  Read more...